A Day in the Mountains, Long Ago: spigolo Jori on Punta Fiames

The day I’m describing took place near Cortina d’Ampezzo. Italy almost 51 years ago, 12 September 1963. I was on leave from the United States Army, and stationed in Mannheim, Germany. This however, was my very first of many trips to the wonderland of the Dolomite Mountains of Northern Italyspigolo jori fiames

I had dreamed about climbing many of the famous routes in these magical mountains—made famous from the writings of Herman Buhl and others. One route near Cortina d’Ampezzo caught my eye for it’s marvelous and uncompromising line to the summit of a major mountain: “Spigolo Jori”, on Punta Fiames!

The Pomagagnon Group forms the Northern rampart of mountains surrounding Cortina, and the sharp arête has been named “Spigolo Jori” as a tribute to the first ascender, Francesco Jori, who along with his partner Kaethe Boeske, made the climb in 1909.

I had dreamed about climbing many of the famous routes in these magical mountains—made famous from the writings of Herman Buhl and others.
One route near Cortina d’Ampezzo caught my eye for it’s marvelous and uncompromising line to the summit of a major mountain: Spigolo Jori, on Punta Fiames!

I made the trip to Cortina knowing well the famous mountain guides, the Scoiattoli, or “Squirrels” who served visiting climbers, would be able to provide me with a partner.
And that is how I became acquainted with Maurizio de Zanna, known to his clients and friends as “Toto”.

After meeting briefly, we decided to do a couple small familiarization climbs in Cinque Torri: Torre Lusy, and Torre Barancio easily fell to our prowess the next day. Subsequently we set out a few days later on 12 September for what has become one of the more memorable experiences of a lifetime. Early morning we drove my VW to near the Hospital and parked. The path leading to the climb was very pleasant and the temperatures cool; we made rapid progress to the base of the imposing wall.

After a brief break we roped up and the climbing began with “Toto” leading rapidly on the still easy terrain. There were plentiful holds for hands and feet, with many spacious ledges. We were really “in sync” and moved fast for about the first third of the wall. A long traverse led right, directly to the towering arête which now loomed above us.

The actual climbing difficulties began here with terrain at UIAA Gr. IV (YDS 5.4-5.5), which didn’t slow us down much. We were now paying close attention to rope management and mutual security, and having a marvelous time just chatting about life and climbing in particular. As we continued, the angle was ever increasing and the face we were ascending narrowed. We could clearly see the well-known triangle of a roof, threatening to bar our upward progress. spigolo jori fiames

“Toto” was climbing in mountaineering boots, and needed to use a single etreir at a short crack as a result. The toe of the boot was too stiff to twist into the crack for an easy foot jam, which I was able to do in my light kletter boots with “Marwa” soles. The face immediately below the roof was the crux of the climb, and “Toto” again resorted to one move of artificial on the polished rock face.

The Langes Guidebook made this crack sound fearsome at the time, but it really wasn’t very difficult when proper technique applied.

The climbing here was UIAA Gr. V , or YDS 5.7/5.7+. A chimney angled towards the right base of the roof, allowing relatively easy passage, and forced the climber onto a steep face split by a diagonal wide crack festooned with several old pitons.

We were fast approaching the top of the climb, but the surprise of signing the route register one pitch below the summit was a real treat as well as a surprise!

After reaching the summit, I had “Toto” take the one last photograph using the film remaining, of me sitting atop Punta Fiames.
I still dwell on that experience as one of my finest experiences in 55 years of climbing.

After some scrambling down to a path leading East over to Forcella Pomagagnon, we rapidly descended back to the automobile, Cortina, a tavern for some beer and wonderful South Tirolean “speck”. Altogether, a “fine day in the mountains”, and now…a time long ago.

Rodger Raubach is a long time climber now residing on a ranch near Douglas, Wyoming, USA.
He is a retired doctoral level chemist and worked in the chemical industry until his retirement in 2009. 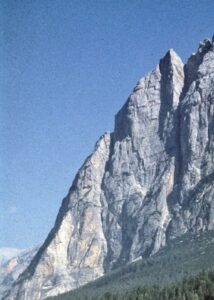 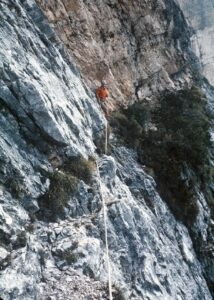 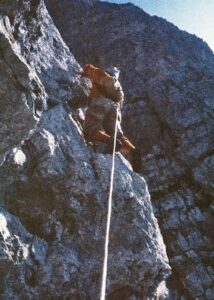 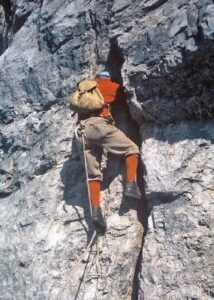 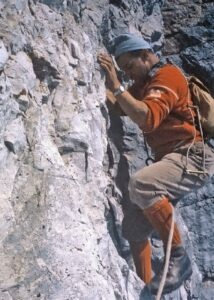 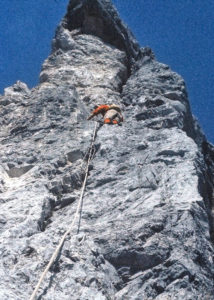