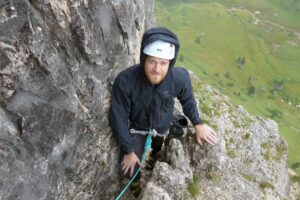 Going to Italy, I thought I was going to do all the tourist activities – see the canals of Venice, wine tour of Tuscany and try to say what’s up to pope Francis. Then, for a surprise birthday gift I received a guided climb in the Dolomites.multi-pitch

Out of everything I did in Italy the climb in the Dolomites was my favorite thing.

At the time, I had been been rock climbing for less than a year. I wasn’t a super strong climber but I also wasn’t out there to do a crazy challenging route.

I was there to slowly scale the mountain and enjoy the breath taking view.

The route I did was relatively easy, anyone who has been rock climbing in a gym a few times would have no problems. I emailed the guide Enrico before I left Canada. We talked back and fourth a few times talking about gear and my climbing experience. I knew I wanted to go really high so I told him I wanted to do a multi pitch climb.

As soon I landed I rented an Alfa and headed north to the mountains. We spent the night In Cortina d’Ampezzo, a famous ski town. I met with Enrico the night before the climb at my hotel where he explained the climb and the possibilities that it might rain. I knew I was going to try and climb no matter the weather conditions. Enrico picked me up early in the morning. 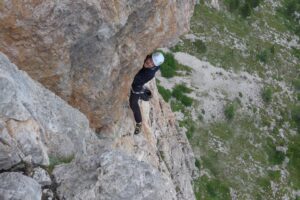 Our original plan was to do a big mountain called “Tofana” but due to the weather we were unable to. Enrico had a back up plan to go to Cinque Torri where there are some multi-pitch routes and single pitches just in case the rain started to pour down. We pulled up and there were these little hotels called Refugio’s. Enrico said that if you didn’t want to pay the expensive price of Cortina another option was these cheap Refugio’s. Costing roughly 50 Euros and that included food. If I did it over again I would defiantly stay at the Refugio’s. The view alone would be worth staying.multi-pitch

We hiked up to the base of the climb, strapped on our gear and started to climb. The route was called Via Miriam it had 6 pitches and was roughly 190m. The climbing was amazing nothing like the polished rock outside of Toronto. The last pitch it started to rain but even with the rain the holds were awesome to grab on to. We got to the top walked around to another spot and rappelled down. I still wanted to climb more so Enrico found some short sport routes, which I was able to climb up. The rain started to come down really hard so we hiked back to the Refugio and had some lunch and wine. Even with the rain cutting my day short it was still the highlight of my trip.

If that’s not enough climbing for you. We headed down to the Amalfi Coast after, rented a boat, strapped on our climbing shoes and deep water soloed the endless cliffs there. If you have the strength try the Lovers Arch in Capri.