The avalanches: basic information and advice

The risk of avalanche is one of the constant worries of powder-snow skiers, ski-mountaineers and of ski-station management.
Many fans of off-piste skiing and ski-mountaineering are concerned by it while others ignore it, either through lack of awareness, incompetence or over-confidence. Off-piste skiers and ski-mountaineers should not attempt a descent without considering the risks: improvisation should not take the place of basic care. Above all, skiers who often go back to the same areas should be aware how often the danger of avalanches is undervalued in these circumstances.

One winter is never the same as the next and there are years when very fragile layers of snow form more easily making slab avalanches more likely.
Reading these pages, you will become aware that it is possible to predict the risk of an avalanche. But there will always be some risk, unless you give up the pleasure of off-piste skiing all together. So it is essential to be able to take responsibility for yourself or, if this is not possible, you should put yourself in the hands of an experienced guide.

How much risk should you take? This is what you should ask yourself before tackling off-piste descents, especially after a long period of enforced inactivity, and when good weather and fresh snow make you really want to go skiing…

The answer to this question is not straightforward because where avalanches are concerned the margin between a medium and a large risk is very small.
There are many ways a great day’s skiing can turn into a drama and chance plays a significant role.

Without going into detail on the various studies on snow, we will see how, by following a series of general points on avalanches yu can, from these observations, limit the risks.

Finally, we will look at how to behave in the event of an avalanche.

Various scales exist to measure avalanche risks and different countries issue “bulletins” based on these. You need to learn how to interpret them remembering that no scale claims to be perfect: it is up to the skier to make choices based on the weather, route, time, the skiiers’ experience and also on the mountain: depending on the altitude and exposure, the risks in the “bulletins” can vary considerably from one mountain to the next.

This is the right time to point out the differences with respect to the risk of an avalanche for off-piste skiers and ski-mountaineers:

On the other hand, some skiiers consider it their prerogative to make the first tracks after a large snowfall on the most beautiful slopes of the region. They should not be imitated and you need to know when to wait and even give up when there is the slightest doubt. Weekend ski-mountaineering trips planned in advance may have to be changed or cancelled without hesitation in cases of danger. 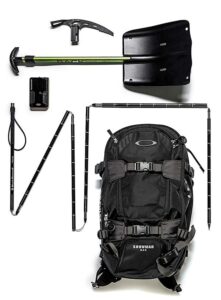 Equip yourself with an ARVA (Search Equipment for Avalanche Victims) and obviously learn how to use it well and practise using it regularly.
Avalanche airbag packs are quickly becoming the fourth piece of must-have gear for backcountry travelers, along with beacons, shovels and probes.

Do not ever ski alone and avoid groups that are too large.

Tell someone in the valley exactly where you plan to go skiing.

Skiing down gullies is less risky that down open slopes of average gradient, except when there are significant rises in temperature.

Summer knowledge of locations allows you to choose rocky areas which are safer than mowed pastures and meadows, because snow does not stick as well to the latter.

Choose with care the areas where you need to stop and avoid lingering under large outcrops or crests where the danger can come from above: natural or artificial avalanches started by other skiers who have cut the slope just above, snow sliding.

When there is a blanket of around 60 cm of fresh snow, it is important to choose your tracks with care: preferably choose convex areas: slopes broken up by very steep inclines and by flatter or undulating sections.As a basic safety rule, it is essential not to tackle off-piste immediately after a heavy snow fall (80 cm of fresh snow or less if the snow has drifted). If you must ski off-piste, it’s better to choose tree-lined areas or zones with lots of undergrowth.
Watch out for the warm Föhn wind, which is responsible for an overall melting of the snow.
After a snow fall accompanied by strong winds, especially at high altitude, the risk of slab avalanches persists until there is an overheating of the snow cover: contrary to general belief, cold does not help snow to settle, except when the pre-existing layer of snow is very wet.
In Spring it is better to ski on the east-facing slopes and to avoid skiing late in the day on the south and west-facing slopes because the sun quickly alters the snow creating the risk of wet-snow avalanches.
Avoid crossing a slope in the middle but, if there is no choice, then you should take the following precautions:

It is important to keep the risk of small landslides in mind; these can be very significant if they sweep the skier down the valley possibly across crops of rock or seracs. You always need to be able to assess the risks the route might bring depending on the quality of the snow and on the time of descent.

In the case of small artificial avalanches, it is better to leave the line of that descent after a few turns to limit the size of the landslide. You need to be extremely attentive and not get carried away by the thrill of the descent when there is the possibility of danger.

It is important to highlight the importance of skiing with an ARTVA. It is good practice to check before starting to ski that the ARVA is switched on and that the batteries are charged. But it’s important to be very clear on one thing: the ARTVA does not stop avalanches! For ski-mountaineering it is always good practice to carry a snow spade to dig out a buried person as quickly as possible: statistics demonstrate that survival is not very likely after 30 minutes of being buried.

In summary, avalanches are of two types

These avalanches can take different forms:

Note that certain avalanches are mixed, in that as the quality of the snow varies with altitude, a powder avalanche can occur at high altitude which then sets off a wet-snow avalanche at a lower altitude. In the same way, a slab avalanche on a large slope can become a dangerous powder-snow avalanche.

Accidents: what to do 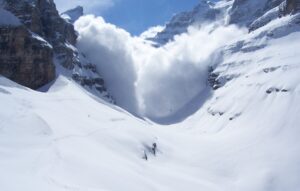 You need to assess the situation as quickly as possible: for example if a powder-snow avalanche is about to overwhelm you, it is pointless to try to follow the steepest path down because you will be caught up immediately by the movement of air and powder.
It is better to escape to one side traversing quickly whilst descending.

If you are caught by an avalanche, whichever type it is, do not panic: if you are in the higher part of the avalanche it is essential that you try to cling onto the slope, grabbing hold of a tree or a bush.

If this is not possible, you should try to ride along on top of the avalanche because by staying on the surface of the avalanche, there is more chance of coming out of it unhurt.

How to organise the search

While waiting, continue the search by carrying out a more precise survey:

If a helicopter is involved, find an open space for it to land free of obstacles and when it is ready to come down, turn your back to the wind, arms crossed in order to help the pilot manoeuvre.
If you manage to find a skier on your own: lie the victim on warm clothes, carefully, because he could have broken something. If the rescued skier is unconscious you must perform mouth-to-mouth resuscitation immediately.

Important: rub the victim vigorously without interruption.
Continue the artificial respiration for a long time: sometimes resuscitation has occurred approximately an hour and a half after beginning the intervention.
If the victim seems to be dead and you do not hear a heart beat when resting your ear on the left side of the chest, you must also perform an external cardiac massage at the same time as artificial respiration.

Important recommendation!
A buried skier under a light layer of snow can be found unconscious; even if you are not a professional rescue worker you must act quickly and perform resuscitation techniques with confidence.
Finally, it is worth saying that avalanches do not always lead to fatalities; it is nevertheless true that incidents involving snow are complex and at times unpredictable and can surprise even the best.
If all off-piste skiing or ski-mountaineering fans gave themselves time to find out the relevant facts and to respect the basic rules above, then without fail, off-piste skiing would claim significantly fewer victims.