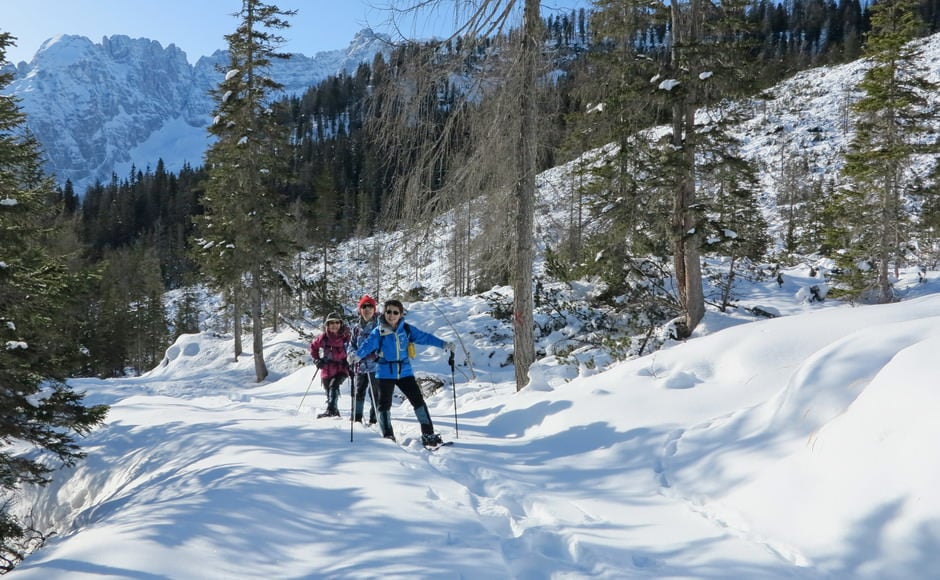 Pousa Marza snowshoe, a trip to the slopes of Piz Popena

When it’s a matter of a snowshoes walk the Pousa Marza area is certainly one of my favourites both because you have it more or less to yourself and for the magnificent views you get on this beautiful trip.pousa marza snowshoe

The area is at the eastern limits of the Ampezzo Dolomites Nature Park and it is called Pousa Marza because once, before it was partially reclaimed, it was very marshy.
In Ampezzo dialect Màrza means “rotten” while pòusa is the clearing in which cattle rests during the hottest hours of the day. So in the past the area was used for cattle pasture.

The area is at the eastern limits of the Ampezzo Dolomites Nature Park and it is called Pousa Marza because once, before it was partially reclaimed, it was very marshy.
In Ampezzo dialect Màrza means “rotten” while pòusa is the clearing in which cattle rests during the hottest hours of the day. So in the past the area was used for cattle pasture.

The route is almost always in the sun and there are magnificent views of the Marmarole massif and the austere, cold Monti della Caccia Grande chain, the long rocky wall which stretches out from east to west linking the first of the Tre Sorelle to Punta Sorapis.

There are no technical difficulties on the route and it does not require any particular fitness level in that the altitude gain is only around 300 metres.

Leave your car and cross the road and in the Torrente Ruvieta bridge area (Ru de Pousa Marza) there is an information panel showing you the footpath to follow. The first part climbs fairly steeply but don’t let this put you off. The steep section isn’t very long and then, as you know, it takes a while to get your muscles into gear.

You soon get to a junction near a stream. Turn left here and cross the stream following the right bank of the stream now and continuing uphill. Around 40 minutes later you get to an attractive clearing with Casòn de Pousa Marza (or Casòn dei Cazadore – 1855 m), devoted to St. Uberto, patron saint of hunters.

A break here is a must. Sit down on the Casòn’s sunny bench with magnificent views of Sorapìs and beyond.

Behind the hut (NNW) at the edge of the clearing there are some hillocks with steep rock faces above them. These are the Tàche (heels), a word which is used figuratively to indicate a rise, a higher part of a slope.

We continue on our way crossing the clearing in a westerly direction and at the end of the clearing we start climbing (see signs) in the direction of the clear rocky peak called Corno d’Angolo (2426 m.) in the midst of snow covered dwarf mountain pines.

Careful here: in the absence of tracks it is not easy to find your way here and easy to get lost. If there isn’t much snow here taking the wrong path means walking in the midst of dwarf mountain pines which makes it very hard going. If in doubt I thus advise you to retrace your steps and return along the path you came on.

We are now in a vast open area, a snow desert at the foot of Piz Popena, the imposing mountain above us. This area is called Valorié and a walk across it with snowshoes is a truly unique experience. On the gravel and rocky rises above us it is not rare to catch a glimpse of a chamois running daintily and elegantly across the rocks.Pousa Marza snowshoe

Our objective is the upper limit of the forest which we can see in front of us here, once more in a westerly direction. We soon get to the forest which a footpath information panel shows us is at 1956 metres. Follow the signs to descend to Ponte di Rudavoi on CAI footpath no. 222 from the ruins of Rifugio Popena. pousa marza snowshoe

After an initial even section the footpath descends steeply on the western edge of Crèpe de Rudavoi, the long rocky bastion overhanging the Strada delle Dolomiti to our starting point. As you descend note the rock faces emerging from the forests to your right. These are Crèpe de Piàn de ra Mòres which owe their name to the clearing below from which the large stones used to make grindstones for the mills were gathered. No “more” – blackberries here then as these do not exist in Ampezzo.

We are now at the end of our snowshoes trip to Pousa Marza. We leave the forest near the Rudavòi bridge on SR 48 and follow it in an easterly direction for around 2 km to our starting point.

DIifficulty: Easy. No obvious danger. Take care not to lose the path.