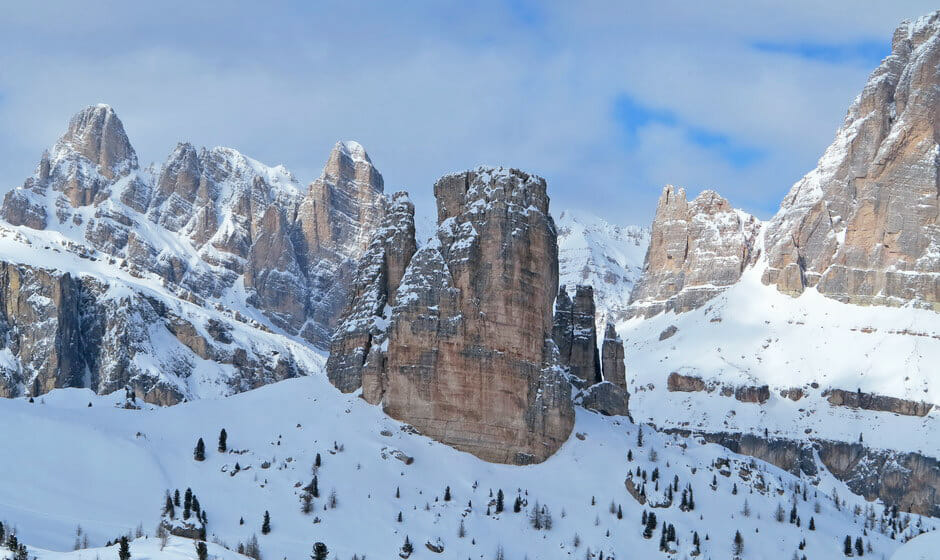 In the following article the Irish journalist Catherine Murphy tell us about a 2-3 hours snow shoe hike.
This tour brings you right into the heart of the Cinque Torri. In terms of scenery, the Dolomites have an embarrassment of riches and this area is one of the most beautiful. More importantly, the tour walks you right through WWI history, through trenches and past caves and huts that Italian troops slept in and fought from.

Cortina d’Ampezzo in Italy is one of Europe’s glitziest resorts but it has far more to offer outdoor enthusiasts than you might think.
Cortina d’Ampezzo, so-called ‘Queen of the Dolomites’, has a long-held reputation as one of Europe’s glitziest resorts, popular with fur-clad Italians who like nothing more than to promenade on the resort’s main shopping street, the Corso Italia, each evening.

But this jewel in the crown of the Italian Dolomites, former holiday hideaway for Francis Bacon and 1956 Winter Olympics host, has far more to offer outdoor enthusiasts.

If you love combining winter activities with history and culture during winter or summer holidays, Cortina should be on your must-visit list for 2014, the centenary of the beginning of World War I.

The mountains above Cortina are steeped in WWI history, the front lines of opposing Italian and Austrian troops still visible 100 years later and the remains of a military base still contained in the depths of the mountain.

What could be more fitting than to visit the resort’s “open air museum”, situated in the Lagazuoi area near Passo Falzarego, on a two-hour snow shoe hike? In what proved to be a moving and humbling experience, I spent a sunny December morning hiking with local mountain guide Enrico Maioni.

Enrico was born and bred in Cortina and speaks Ladino, a local language, which is spoken in a number of valleys in the Dolomites and continues to be taught in schools and spoken alongside Italian and German.

We ascended almost 400 metres through forest on snow shoes to reach the Cinque Torri, the famous rock towers that are clearly visible from the resort. snow shoe hike

Although there are one or two steep sections, the hike from 1,889 metres to 2,255 metres can be completed by anyone with a reasonable level of fitness.

Snow shoeing requires little or no skill but still, novices have the option of taking the lift to the top for a gentler route.

What’s special about this tour is firstly that it brings you right into the heart of the Cinque Torri.
The name Cinque Torri was given because you can see five towers from the resort.

This area was chosen as the front line for Italian troops because it offered commanding views of nearby mountain ranges and valleys. The top command of the Italian artillery was positioned here, along a large ridge of rocks below the mountain peak, for two years during the war.

Cortina, which originally became famous for climbing and had welcomed its first skiers in 1894, already had a burgeoning tourism industry which was interrupted by the onset of war. Before WWI, it was part of the Austro-Hungarian empire. It’s said that neither side bombed the village because both sides wanted to win it. The battles fought in this area were hard and bloody.

As you snow shoe through this special place, it’s incredible to imagine what troops went through.

Tragically, the men who fought each other high above Cortina fought on opposing sides but came from neighbouring valleys and often knew each other. Equally tragically, many of them lost their lives not just in battle but from cold and avalanche.

Perhaps the most famous legacy of troops fighting in this area is the Via Ferrata, the ‘iron ways’ system of steel ropes and steps constructed by soldiers to move covertly through the mountains and subsequently used by Austrian troops to retreat.

Most recently seen being attempted by actor Stephen Fry in the ‘Bear Grylls Wild Weekend’ TV programme, they are now massively popular with holidaymakers looking for an introduction to climbing.

Italian troops worked around the clock for six months to construct a tunnel and on June 20, 1917, detonated 33 tonnes of dynamite in a bid to blast the Austrians out of it. In fact, Austrian troops had already retreated.

As you climb towards the Cinque Torri lift station, areas of interest in the open air museum are marked. Stop for a moment and pay tribute in this silent, awe-inspring place.

The tour also gives you the chance to see Cortina’s other gems. The ski area is well known for its technical off-piste skiing and difficult couloirs.

Along the wayof our snow shoe hike, you can see some of them – Bus de Tofana, which usually requires a 20 metre rappel at the start, and Creste Bianche.

Lagazuoi is also a connecting point for the well-known Sella Ronda ski tour and for devoted history fans, is a point on the Great War ski tour, which takes in Cinque Torri, San Cassiano, the Marmolada glacier, where troops dug trenches through ice, and Civetta.

At the end of your snow shoe hike, stop for lunch at the Refugio de Scoiattoli which faces the Cinque Torri and therefore boasts one of the best views in Europe. Tuck into a plate of Casunziei, a dish of beetroot filled ravioli that is unique to Cortina, safe in the knowledge that you have earned it on what was a memorable morning in the mountains.

Note:
This article was published on “Outsider – Ireland’s Adventure Magazine”