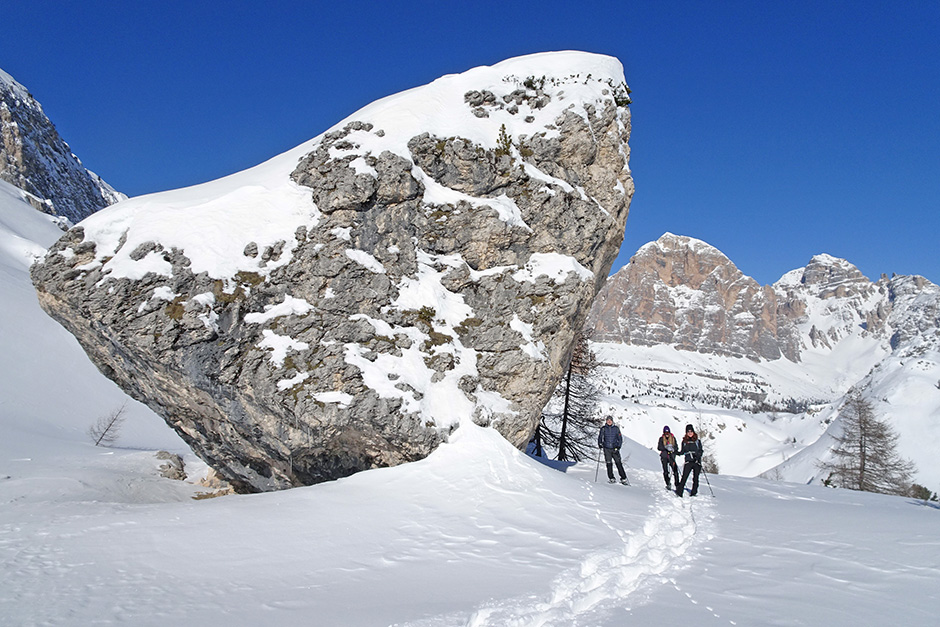 Discovering the Becco Muraglia with snowshoes

One of the many worthwhile straightforward snowshoe excursions taking you to one of the least known corners of the Dolomites is the well-known Becco Muraglia and what remains of the Giau Muraglia, now hidden in the vegetation and worn away by difficult weather conditions.

Before embarking on a description of the itinerary I should note that this easy snowshoe hike is equally satisfying in summer or generally in the absence of snow. The beauty of this attractively sunny site is its greatest attraction as well as the forest animals you may meet, the history of the Muraglia and the proximity of Malga Giau, a convenient and inviting stop off point. Together these make it a must for anyone who loves Cortina and its wonderful mountains.

From Cortina d’Ampezzo follow the S.S.48 road to Pocol (6 km), before continuing on S.P. 638 in the direction of Passo Giau. Malga Giau is around three kilometres before the pass, on the right, near a bend in the road. If its access road is open and free of snow you can get to the Malga and park there. If it isn’t leave your car in a car park which is around two hundred metres lower and do the last part on foot in around 15 minutes.
It is around 14 km from Cortina.

The altitude at Malga Giau is 2014 metres and it is surrounded by 114 hectares of pasture for cows, horses, sheep and goats. It was refurbished in 2015 in work which made a very welcoming and hospitable agriturismo out of it. The site is a magnificent one with wonderful views of Lastroni di Formin and Croda da Lago.
The itinerary you are about to set out is not on a footpath and it can thus be difficult to find unless someone has already done it and left a track on the snow. Your waymark is Becco Muraglia, a small, isolated pyramid-shaped rocky peak clearly visible from the Malga. Your trip begins northwards in the direction of Becco, more or less on the level, and continues into the forest.

You continue for a few minutes on this flattish terrain and then start climbing to the left (north-west) through forests, in the direction of the southern slopes of Becco Muraglia.

You are now in a clearing on the edge of the forest and the majestic south face of Tofana di Rozes rises before you in the distance. A raised straight line across the land is the Giau Muraglia, a historic structure.

The wall marks the ancient state border between the Serenissima Republic of Venice and the Hapsburg Empire, which lasted until 1918, when Cortina became Italian.

The Muraglia di Giau under the snow

Now, in the absence of a track through the snow, identifying the right way is more difficult. Follow the Muraglia for a hundred metres or so, keeping to the left of it, until, when it gets steeper, turn left and continue, zigzagging up to the wide shoulder at the base of Becco Muraglia, which is easy to see from below. N.B.: if there isn’t much snow the large numbers of dwarf mountain pines make getting to this point impracticable and you will need to keep further to your left (south) and find the best way to the great boulder I will shortly describe.
In this section you need to be capable of assessing the state of the snow effectively as, in specific snow conditions, the risk of avalanches here is a factor to consider.

When you get to the saddle to the left (south) of Becco Muraglia pause a moment and enjoy the magnificent views of Monte Lagazuoi, Cime di Fanis and Cinque Torri, Tofane, Sorapìs, Croda da Lago and Lastoni di Formin, Monte Cernera and Passo Giau. They are breathtaking!
After this well-deserved break, continue downhill briefly in a south-south-west direction before climbing up again to meet footpath 443 which leads to the Cinque Torri.

Right here on this path a huge characteristic upturned pyramid shaped boulder which is easy to see from a distance, is a further orientation aid.

When you get there (2210 metres) don’t be tempted by the inviting well-signed footpath to Passo Giau. You now begin your descent in an east-south-east direction.

Malga Giau is soon visible once again, two hundred metres below you.

A short, steep descent takes you quickly to the Malga where you can enjoy local specialities and delicacies from its sunny terrace!

Map of the area

Whilst this is an easy excursion, in specific snow conditions some of its slopes may be an avalanche risk.
It is almost entirely in the sun and at the end of the winter its snow soon gets mushy.