The different rock climbing grades across the five most popular systems.

In the sport of bouldering, problems are assigned technical grades according to several established systems, which are often distinct from those used in roped climbing. Bouldering grade systems in wide use include the Hueco “V” grades (known as the V-scale), Fontainebleau technical grades, and more.
You can read a very detailed article about bouldering grades here: www.99boulders.com. 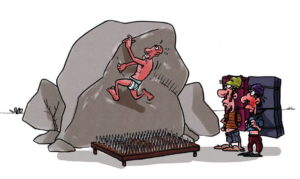 Drawing by Master Claudio Getto “Caio Comix”
– Have a look at his site: www.caiocomix.com –

There are also other systems used around the world to grade rock climbs.