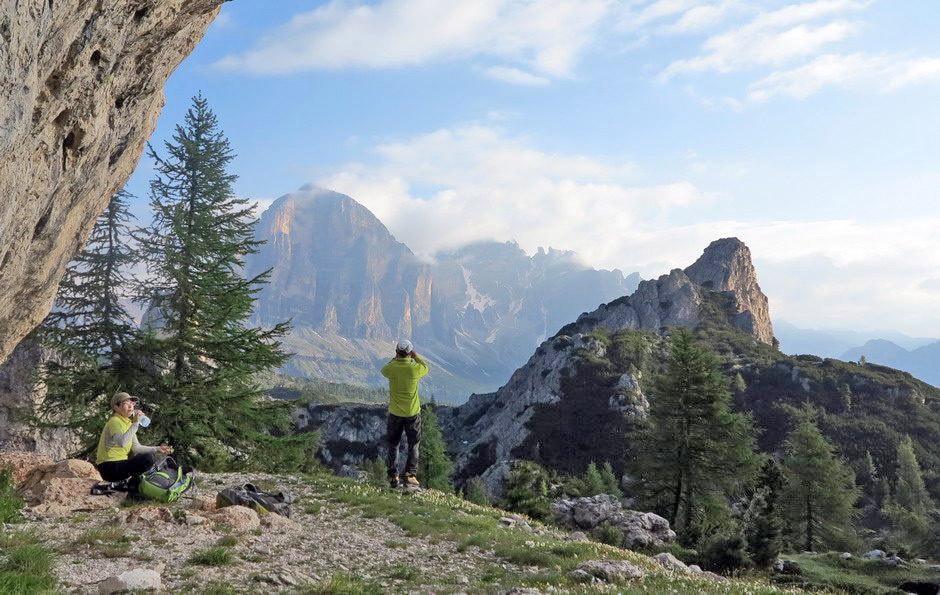 Becco Muraglia, a hidden corner away from the most popular routes

The climb I’m going to tell you about today is Becco Muraglia (2271 m), an isolated rocky crag at the foot of Mt. Nuvolau and the starting point of the historic Muraglia di Giau wall. Bèco de ra Marògna in Ampezzo dialect is clearly visible from the Passo Giau road near the Casera of the same name and is the bulwark of the famous Marògna de Jòu wall which stretches to the base rocks of Lastoni di Formin. Built in two months in 1753 to bring long standing quarrels between the peoples of Ampezzo and San Vito for Giau pasture rights to an end, only a small part of the Muraglia is now visible.

Climbing to the Becco peak is neither time consuming nor especially difficult but I would advise only climbers with a minimum of experience to attempt it, perhaps assisted by a guide, as there are no climbing notes and the last section is an unprotected and a trifle delicate rock face.

From the bend in the Passo Giau road just a little beyond the crossroads for the Casera of the same name, you enter the wild Forame forests and following sporadic animal tracks into the vegetation overhanging the road in the midst of trees, dwarf mountain pines and rocks, you aim for the visible crag. Keep to the right of the crag, latterly on traces which tend to landslip, you reach a straightforward, panoramic grassy hillock at the base of a grey, slanting rock face.

On the summit of Becco Muraglia

Climb up the around 40 metres of this rock face – it is best described as a scramble – on rocky footholds. It has a slight tendency to crumble and is gravelly but overall it is fairly pleasant. Start from the right hand side and then gradually move leftwards to the top taking around three quarters of an hour from the road. This rock face requires some care, especially in descent. From up here the view of Croda da Lago, Lastoni di Formin, Cernera, Nuvolau and Cinque Torri is an unusual one.

Some time ago, on a day dense with rain (which was promptly let loose a few seconds before I got back to the car), after meeting a whole family of roe deer in the wonderful forests below, I reached the peak of the Becco, a good one for romantic climbers, for the fifth time. In the midst of a pile of debris at the top, exactly a quarter of a century since my last visit, I found the peak’s singular cross – a wooden pole with two panels attached to it whose meaning is unclear to me – once again. It was late and I delayed my descent to admire the views of the valleys and mountains changing colour at sunset in a silence which is truly unusual in August in Ampezzo.

Despite the fact that it has been climbed on two routes, Becco Muraglia is certainly of marginal interest for Alpine climbers and no climbing guide contains a description. I still feel that it is a worth while half day excursion for climbing lovers who are looking for a hidden corner away from the most popular routes in an area which is accessible to everyone but retains a truly rare solitude. becco muraglia