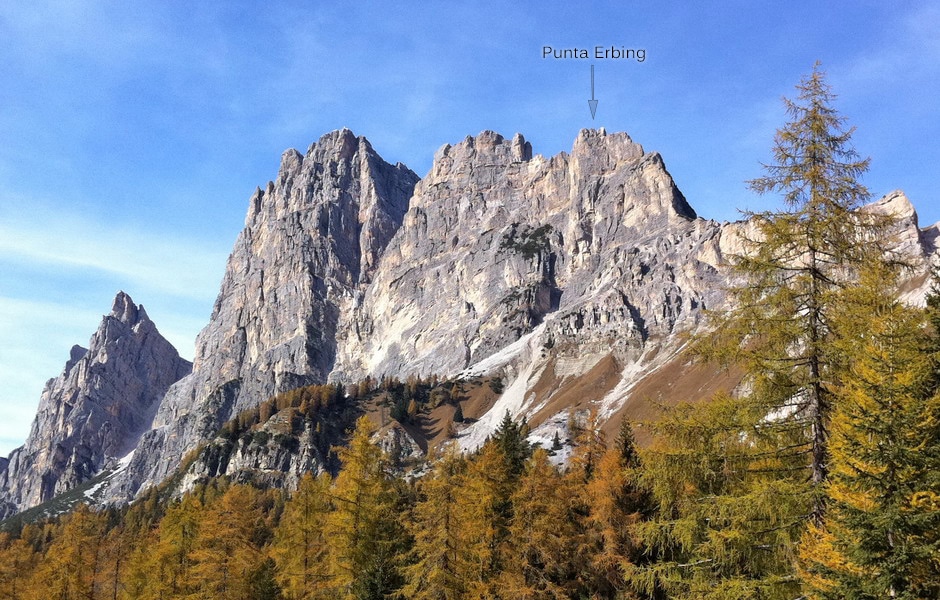 Celebrated Ampezzo Alpine Guide Antonio Dimai knew Mt Pomagagnon very well and opened up a grand total of five new routes on it from 1899 to 1905. The last of these climbed up the south face of the ridge’s easternmost peak (2301 metres) with Dimai’s inseparable climbing partner Agostino Verzi and a certain Erbing whose name lit up Dolomite history like a meteorite and then remained as the name of the peak.

In 1903 Dimai had let the conquest of nearby Punta Zestelis slip through his fingers and fellow guides Pompanin and Zangiacomi had led their client Grauer to the top, but two summers later he had the honour of christening an as yet unknown peak.

You can ascent to Punta Erbing relatively easily, from the end of the Terza Cengia equipped path (for expert Via ferrata climbers only, however) from Forcella Zumeles.

Getting to the Punta requires first getting up to Forcella Zumeles (2072 metres (an hour and a half from Passo Tre Croci, just a little longer from Rio Gere, twenty minutes from the Sonforca ski lift).
From the col, follow the signs through the pleasant level forest north of Crepe de Zumeles until the path starts climbing up through dwarf mountain pines.

After picking its way carefully across a steep landslide-prone area the route continues on two brief rock sections which emerge on the Punta’s wide scree and rock, wild and highly panoramic ridge.

The path zigzags up to an exposed indentation in the ridge overlooking Cortina where the Terza Cengia comes to an end. Just a few cautious minutes takes you to the point, with its magnificent views over the Ampezzo basin (3 hours from Tre Croci). Return the same way you came up.

To date I have ascent to Punta Erbing various times, with friends and alone. I like its characteristic climb up through the dwarf mountain pines which slips away a little more every year, getting my hands on the solid rock, scaling the tiring scree shoulder to the north and walking across its exposed final ridge to its narrow peak, where only a cross marks this minor and little regarded summit, an exceptional viewpoint and, above all, a place of silence.

Related Posts:
An anniversary to remember.