The life of a Mountain Guide

Why become a mountain guide? I was born in a wonderful place, Cortina di Ampezzo, where I live and work to this day.
Like many of the children born in the Ampezzo valley, when I was little I started to explore this amazing environment on Sunday walks with my parents and later on with my friends.

The surrounding mountains held a great fascination for me and the desire to reach their summits soon made itself felt.

It was for this reason, when I was fourteen years old, that I started climbing with my friends. I kept it quiet from my parent at first; they considered it a dangerous activity without expert supervision.

Luckily I managed to survive the dangers of being inexperienced and reckless and, at the age of 20, was invited to join the Gruppo Scoiattoli (the Squirrel Group; the most famous group of climbers of Italy).

From that moment onwards, I began to expand my climbing portfolio, mainly in the Dolomites, but also in other ranges (climbing various ice and mixed routes in the Mont Blanc and Monte Rosa areas, and making an ascent of Denali (via West Rib) in Alaska).

The allure of the great mountains however was not enough to lure me away from my great passion, rock climbing. Having climbed many of the classic routes in the Dolomites, for a short period I dedicated myself to making solo ascents (including the Costantini-Apollonio route on the South Pillar of Tofana di Rozes in 1981).

In the early 80s, sport climbing made its appearance in the Dolomites.
I started to travel abroad to sport climb and discovered a whole new world of rock climbing.

I had found a style of climbing that was perfect for me and my enthusiasm for it is still strong. This enthusiasm has helped me to climb at a fairly high grade. My best effort being a redpoint of an 5.13d, but years pass by and there is less time to dedicate to training, I no longer climb this hard.

In the meantime I attended training courses, which enabled me in time to qualify as a Mountain Guide. In 1984 I joined the Gruppo Guide Alpine Cortina (the local guides’ organization), which I am proud to be a part of and where I continue to work.

What has always been a passion, became later on in the years a job: today I guide anyone with the desire of it up on these mountains on both complicated and easy ascents, summer and winter, trying to transmit to my clients the love I nourish for this area.

If you have already been to the mountain with me I’d be grateful if you could write a review. My guests often tell me how helpful it is to read past guests’ reviews before booking their own visits. 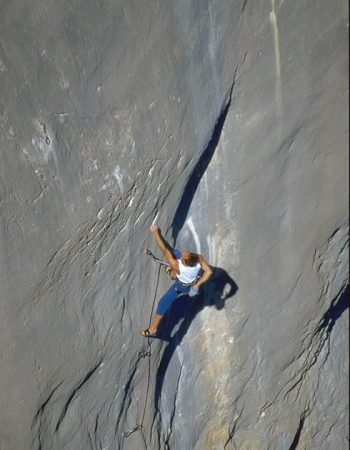 I’ve been getting to know, explore and love my town and the wonderful mountains around it – the Dolomites – since I was a child.

As I grew up, my passion for the mountains and the fantastic outdoor activities available in this dream environment prompted me to take up the mountain guiding profession which is, for me, the most wonderful job in the world. Today I guide anyone with the desire of it up on these mountains on both complicated and easy ascents, summer and winter.

My intent is to convey the knowledge gained over many years of mountaineering, hiking and climbing, and trying to transmit to my clients the love I nourish for this area.

Hereunder, two old movies of the annual International Mountain Guides Climbing Championship. The IFMGA climbing championship take place every year and every certified mountain guide can participate.
The championship underline the excellent know-how and the high level of training of the mountain guides.

This website uses cookies to improve your experience while browsing the site. Of these cookies, the cookies classified as "Necessary"1 are stored in the browser as they are essential for the functioning of the basic functionality of the website. I also use third party cookies that help me analyze and understand how this website is used. These cookies will only be stored in your browser with your consent. You also have the option to disable these cookies, but please note that disabling some of these cookies may affect your browsing experience.
Necessary Always Enabled

Analytical cookies are used to track visitors on the website. How do they browse, how long are they staying, and what are they looking at, e.g. also demography is part of an analytical cookie.

They are essential in measuring the performance of a website and to optimize it. They can be witnessed as real management instruments.

e.g. Google maps set this type of cookie, and in order to view them you must give your consent to the analysis cookies.

YouTube and Vimeo services collect user information too. Hence, if you don’t accept analitycs cookie, the videos will not render.

These are cookies that are not particularly necessary for the website to function. This category includes all cookies that are used to collect user personal data through analytics, advertisements, other embedded contents.