Let’s talk a bit about thunder and lightning, which take place during storms and which of course are of much interest to climbers and mountaineers.
Storms typify the summer season, from June to September, during which period we can on average have 6-10 days with storms per month, usually in the afternoon and evenings. The coming of a storm can be forecast by observing the local weather conditions. 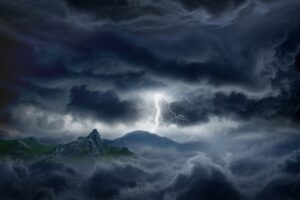 For example, the cloud cover over the mountains can indicate the direction the storm will take.
But sometimes the irregularity of the cloud formations means it’s not always possible to accurately predict if and where the storm will strike. More accurate predictions can result from counting the seconds between seeing a lightning flash and hearing the thunder. lightning dangers
An interval of 3 seconds between lightning and thunder means the storm is about 1,000 metres away.

On a plain, thunder can be heard up to 20 km away whereas in mountainous areas the sound is stopped from carrying by the high peaks. Echoes can however cause confusion over the violence of the storm. Without going into the details of storm electricity, we can say here that it is a friction electricity, or electricity generated by the friction of water droplets in contact with ice particles in the clouds, agitated by winds. The electrical discharges can be observed even before the rain starts to fall. The lightning hazard decreases when the sky is covered evenly by grey, rain-laden clouds. lightning dangers

Lightning dangers in the mountains

Lightning results from the build-up and discharge of electrical energy between positively and negatively charged areas storm clouds, or between charged portions of the storm and the ground. Lightning bolts can reach up to 20 km in length. The electrical discharges taking place between clouds are rather hazardous for outdoor people, especially if we are up on a mountain that is fully covered by clouds. The worse hazard comes when lightning strikes the ground and although the strikes can having various ramifications, this type of lightning almost always involves a main branch striking the mountain peaks. Also, lightning often returns to strike in the same zone.

It is very important to be aware of the lightning hazard and, when it becomes impossible to avoid the storm, to know how to shelter from it. Experience teaches us that the hazard is greater on rock than on snow or ice. This applies particularly to the so called Fuochi di S. Elmo (“St. Elmo fires”), which is a silent form of lightning produced in air that is electrically highly-charged.

The “fires” occur as bluish flames that arise from pointed metal objects, such as the crosses on mountain summits, electricity pylons etc.. Sometimes you can also hear crackling.

In the event of lightning hazard, you should move away from upward-pointing rocks and generally from everything that can act as a strike-point. Stay well away from cables, electricity pylons, trees or isolated rocks; avoid water- and drain-pipes, vertical walls and as far as possible keep away from metal objects.

Even sheltering under a rock is not a good idea, for electricity can spread down through the rock and still be dangerous. To sum up, although perhaps an obvious statement, we recommend you always try to find a shelter before the storm reaches you. Exactly what and where the shelter is depends on good sense. 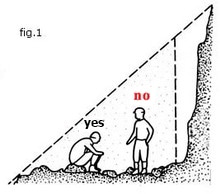 The most serious hazard of storms is lightning, which is a discharge of electricity either among clouds, or between clouds and the ground. Lightning has a temperature of 30,000 Celsius and its speed is 10,000 km/sec.

The danger of impending lightning is heralded in these ways:

In the event of danger: