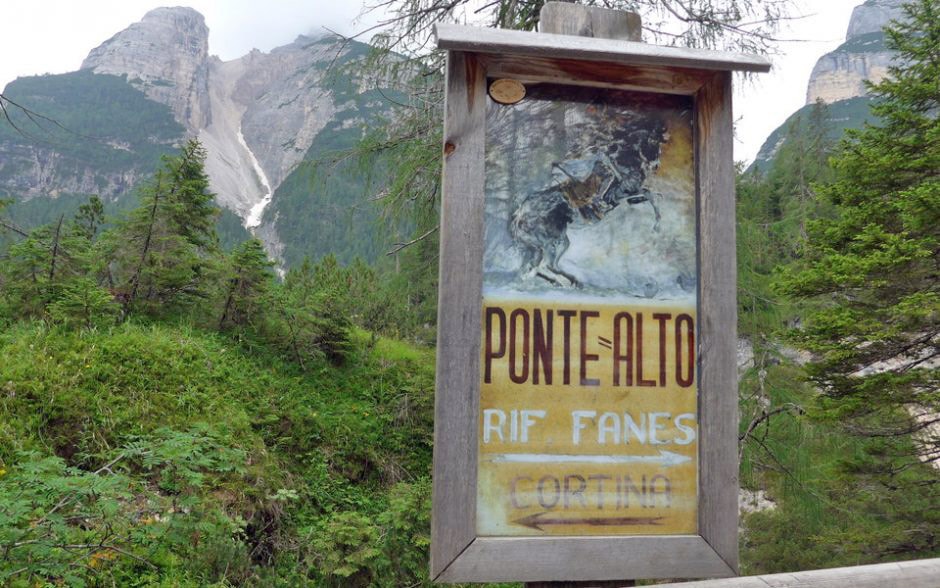 The “Gran Bracun”, the Knight of Brack

For a short walk, or for a “cultural” stop if you pass through these parts, I suggest today a curiosity regarding the Knight of Brack. Around 1930, a painting appear on the left shoulder of the High Bridge (Ponte Alto in Italian). Alfred Mutschlechner, the historic owner of the Fanes refuge, wanted to commission an artisanal painting to commemorate an event that had occurred in this place.

Unfortunately, about twenty years ago the bridge was renovated and the painting disappeared, and no one thought about it anymore.

The Ponte Alto (Ponte Òuto in Ladin language) makes it possible to overcome a deep gorge on the Travenanzes stream.

This place is related to a legend of the fifteenth century, based on events and people who really existed.  The legend concerns the young and noble knight Guglielmo Brack von Asch of the Marebbe valley, who loves Simonia, daughter of the landowner Winkelhofer of Botestagno.

To visit her, the knight would cross the Fanes Valley and the Ponte Òuto. The inhabitants of Ampezzo, not approving of this affair with a foreigner, on several occasions tried to ambush him, but every time he managed to escape.

Finally, they decided to knock down the bridge and wait for the knight to come back. On reaching the spot, the young man realised it was a trap and spurred his horse quickly forward, jumping across the rio Travenanzes where the bridge had been. This way he left his persecutors behind him, full of surprise and admiration.

Brack’s real name was Franz and he lived 100 years later. The name of one of his ancestors was Gabriele, owner of the castle of Brack at Marebbe and lord of the manor of Andraz; he was also the right-hand man of Cardinal Cusano in the war against the Abbess of Sonnnenburg. Fifty peasants on their way to help the nuns of Sonnenburg convent were killed by Knight of Brack between Marebbe and S. Lorenzo.

The Ampezzo Guide of 1905 informs us that in the early-20th century, near the Ponte Òuto, a small wooden building was erected as a tavern. downstream from the bridge. This was the Cabiòto de ra Méšcores, run by the Franceschi sisters who; perhaps because they were good cooks, were known as méscores.

For many years, the tavern was popular with the people of Ampezzo, who would go there for Sunday outings. The Cabioto was destroyed during the First World War during the fighting of June 1915.

The legend of “Gran Bracùn”, the Knight of Brack, is proposed to the curiosity of those who pass through Val di Fanes. Passing on the Ponte Alto, in addition to admiring the gorge about eighty meters deep, thanks to the initiative of some enthusiasts who have not forgotten the historical painting, hikers can read the history of the Knight of Brack.