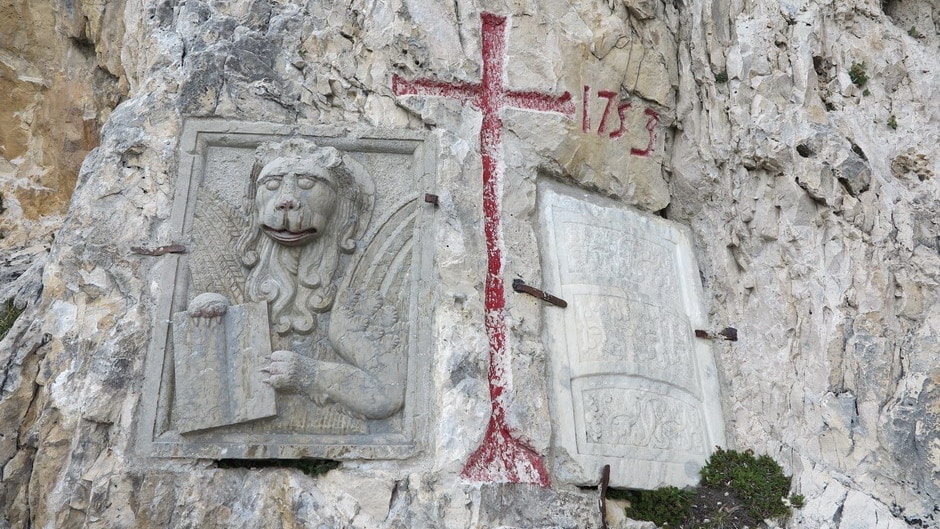 An ancient history, the Giau Wall

The history of the Giau Wall is an ancient one. It is about a controversy over some pastures and land between the inhabitants of two neighboring municipalities: San Vito di Cadore and Cortina d’Ampezzo. The first written document that testifies to the contrasts between the two towns dates back to 1331.

To have a better understanding about the reason for this fight it is of paramount importance to understand the significance of the disputed area: the area of the Giau Pass is a wonderful area, sheltered from the cold winds coming from the north, with abundance of streams and pastures.

Today this magnificent area in the heart of the Dolomites has become a popular tourist area and it is easy to reach thanks to a properly paved road. However, in the past centuries it was a true paradise for shepherds and their animals.
Hence, it was disputed and desired by both inhabitants of Ampezzo and San Vito.

According to ancient memory, it seems that the first ones to graze their cattle in the area were the latter, who had arrived there through saddle Forcella Ambrizola and saddle Forcella Giau, from Malga Prendera and Malga Mondeval. In the document dating back to 1331, a notary established that the area of the Giau Pass belonged to San Vito di Cadore, fixing some border points.

However, controversies between the two populations continued in the following centuries and after 1511, when Cortina became part of Austria, the conflict took on an international dimension.

1752 was a crucial year as it was established that the inhabitants of San Vito di Cadore could continue to enjoy their ancient rights but under one condition: they had to build, at their expenses, a wall to prevent their livestock going in the territory of Cortina d’Ampezzo.

Today, some people think that the difficult conditions forced on the population of San Vito was a deliberate attempt to discourage them in building the wall; thereby, giving up on their ancient rights.

Indeed the wall, which had to be built within 90 days, had to be 2 kilometers long, 6 feet high, with a base width of 5 feet and a top width of 2 feet. Nonetheless, the whole population of San Vito di Cadore put their best effort into the enterprise and they managed to complete the Giau Wall in time, as the territory was considered to be indispensable for future generations.

The Giau Wall and its’ little peak, Becco Muraglia

When thinking about the great effort made in the building of the Giau Wall, the idea of missing a visit of the historic remains is just too big of a loss. In the summer and autumn seasons, when the snow has not yet covered the stunning mountains in the area, it is really interesting to look for the stones and tombstones that mark the boarder line between Cortina and San Vito. The boarder is marked by crosses, the lions of Saint Mark, symbol of Italy and of the Republic of Venice, and the Habsburg shields, symbol of the Habsburg Empire.

The remains are still present in three areas: at the base of the tower Torre Luisa, a small dolomitic spire on the eastern side of the Gusela, at the Becco della Muraglia, near the paved road, and on the northern slopes of the Lastoni di Formin, above the lakes of Ciou de ra Maza.
In some areas, the tombstones have unfortunately been removed by unknown vandals, but in other areas the Austrian marble shield and the lion of San Marco engraved on Castellavazzo stone, still fixed with the original bars, are still there, bringing back the memory of a troubled history and of a much debated border.

Wandering on these wonderful pastures and observing the remains left by our predecessors is a way of recovering a part of the life, economy and society they lived and to remember how the hard work and perseverance of San Vito di Cadore was able to draw the attention of even an empress and a doge.

If you are interested in visiting the remains of the Giau Wall, the boundary stones and the marbles of Castellavazzo with the lions of San Marco and Habsburg shields, contact me! I will be happy to accompany you to retrace a piece of our history. This excursion can be done, partially, also with snowshoes in the winter season.
Further information here: Giau Wall and Becco Muraglia with snowshoes.