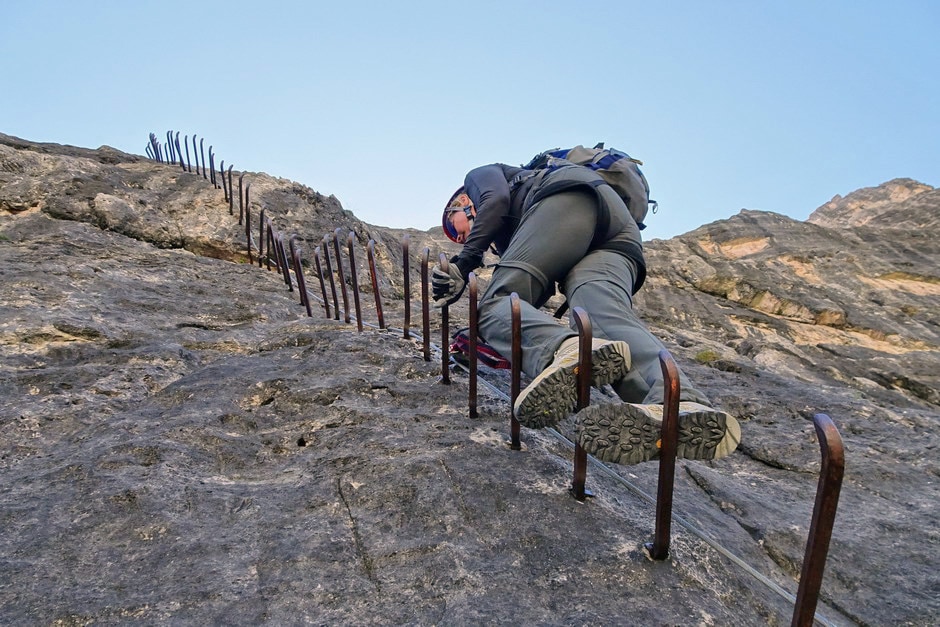 The Minighel ladder, the history of Cortina d’Ampezzo’s first ferrata

The Minighel ladder, Ra Šàra del Minighèl Ladin, is a truly unusual ferrata both in its history and the special way it was made which marks it out from all the ferratas which I have climbed in many years of mountain walks and climbs.

Also mistakenly called Scala del Meneghel or even Scala del Mineghel, it is certainly one of the oldest ferratas in the Dolomites and perhaps the oldest.

It is a very bold ferrata in design terms in the sense that it uses iron rungs fixed perpendicularly into the rock to get over an approximately eighty metre rock face at Majarié (el Souto del Majarié) which dominates this pleasant Val Travenanzes area making it an extremely exposed climb.

It was built by Luigi Gillarduzzi “Minighèl”, then manager of Rifugio von Glanvell.
During the 1915-18 war the rungs were bent by Austro-Hungarian soldiers and some removed making it impassable. It remained in this state until 1958 when Renato Franceschi initiated and funded repair work.

GENERAL ACCESS
There are three main access points to the Minighel ladder:
1. From Rifugio Dibona.
2. From Fiames uphill through Val Travenenzes.
3. From Passo Falzarego or Mt. Lagazuoi.

I have already described the route to be taken to this ferrata in this site and I thus invite readers to click on the following link to read the details: Tofana di Rozes circuit.

I would like to tell the dramatic story here of a former Bavarian soldier from the German Alpencorps, aged just over 20 at the time, who wanted to see the places he had fought in and came to Cortina in the early 1960s.
Accompanied by Roberto Gaspari for a photo service, on descending along Majarié, he managed to recognise the boulder he had been stationed at and began to tell his story: “I arrived by night in Val Travenanzes, without ever having seen the mountains, on a dark, moonless night. When I got to the base of the Šàra I was told to climb it and I was frightened and started crying and trembling.

The officer who had accompanied me put his gun to my head and said: either you climb or we bury you here. I climbed in terror of falling at each step but luck or the good Lord helped me and for two years this Majarié post was my home”.

A further episode recounts the rebirth of tourism in this section of the Travenanzes valley.

After the Austrian army retreated from its defences on the peak and the base of Nemesis and Majaré to trench in at Val Travenanzes, Šàra remained impassable until the end of the 1950s.

It was Renato Franceschi (1910-1986), a surveyor by profession, who decided to repair it in 1958 leaving photographic evidence and a note in which he explained his motives for wanting to repair it and give hikers the chance to climb from Val Travenenzes to Forcella Fontanégra once again.

On 1st August 1915 Rifugio Von Glanvell was destroyed by Italian artillery and the ladder, too, was largely destroyed with its iron rungs being bent or removed.

In the summer of 1958, as no-one had repaired the ladder, he personally decided to organise its repair with the precious assistance of Scoiattoli climbing club members Marino Bianchi “Fouzìgora”, Albino Michielli “Strobel”, Albino Alverà “Boni” and Claudio Zardini “de Jino”. Blacksmith Guido Tògna provided an oxyhydrogen flame and worked iron and dinner for everyone at Pocòl.

At work on Minighel’s ladder

The attached photos bring to life once again people who were much loved by everyone in Cortina and contributed to the development of mountaineering in the postwar period. Since those far off days Šàra del Minighèl has seen increasing numbers of hikers wanting to enjoy the beauties of this unique place.