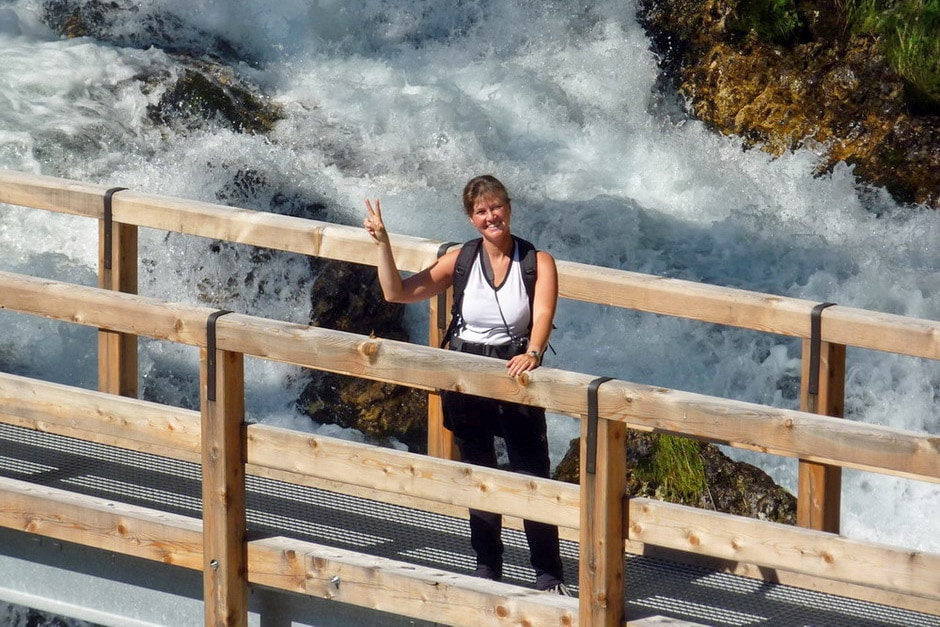 The Fanes waterfalls, canyons and streams

This extremely panoramic and spectacular trip winds its way through deep canyons and gorges to the confluence of the Fanes, Travenenzes and Ra Vales valleys north of Cortina linking up hugely impressive sites in landscape and hydro-geological terms. The two walks underneath the Fanes waterfalls are truly spectacular.

The sequence of potholes, rapids and waterfalls all the way along the course of Rio Fanes is extraordinarily beautiful and the Fanes Cascate Basse are some of the highest and largest waterfalls in the Dolomites.

The route winds through the heart of the Dolomiti d’Ampezzao Park with sections of various difficulty levels and can be attempted in sections or in its entirety, in part by families with children, and has a number of beautiful views and equipped sections with metal cables in the most exposed and difficult points.

The route can be done in either direction. I would advise doing it anticlockwise and this is how it will be described here.

1. The first and simplest but not the shortest begins at the entrance to the park at Ponte Felizon, north of Fiames, and stretches for almost two kilometres on a virtually flat tarmac road.
The other access points, on the other hand, start at the km 11.2 bend on Strada di Alemagna, the so-called Torniché (where the road to Malga Ra Stua begins) and they are slightly shorter than the first.

2. The second descends directly from the car park near the bend, westwards in the forest to Pian de Loa at the height of the first Boite bridge.

3. The third and more panoramic route descends from the car park just above the bend and follows north-west before passing the Boite where the Costa dei Siè gorge comes out and continues through the whole Pian de Loa to the beginning of the circular route.

ROUTE
The route is divided morphologically into three parts: the Rio Fanes climb, the lower Val Travenanzes traverse and the Ru de Ra Vales climb. It is possible to return to Ponte Outo and Pian de Loa from either of these.

Description of the route

Part One
From Pian de Loa enter the wood passing signs off to the left to Ponte Outo (Ponte Alto) and follow footpaths along the left bank of Rio Fanes throughout. Traversing the plain on its lower edge and passing close to two majestic historic trees (Ra ciòces), the path climbs in the direction of the slopes of Mt. Taburlo to the edge of the Rio Fanes gorge and continues on up to the exposed Cascate Basse di Fanes waterfall viewpoint.

Here the descent into the gorge and the most challenging section begins: those who do not feel up to this part can avoid it by climbing up to Ponte Outo from Pian de Loa on the opposite side following the Val di Fanes gravel track.
Once you have wound your way down the narrow channel, traverse the base of the longest waterfall section and climb up once again to the right in the direction of a side channel enclosed by plunging red walls (diffifcult passage equipped with metal cables).
The rocky cavities on the shadier walls are the habitat of one of the most majestic and endangered birds of prey, the Eurasian eagle-owl (Bubo bubo).
On the same rock walls, preferably underneath the sheer slopes but on the opposite side, on the sunnier and warmer slopes, you may catch sight of a small red and dark grey bird with a narrow, elongated beak, the Wallcreeper (Tichodroma muraria).

The footpath then turns left to cross a narrow col passing evocatively behind the longest section of the waterfall. After the thrilling experience of crossing the waterfall, the route continues, climbing to the summit of the opposite side of the gorge with metal cables (rest points with benches) and the Valle di Fanes gravel road (on which you can return to Pian de Loa).

You now take the Fanes shortcut (path no. 10) and after a brief climb descend on the right hand path to cross Rio Fanes on a first walkway. The footpath then winds up again on a narrow path on the left bank.

After passing a small scree slope, cross the stream on a second bridge at the base of a climb in which Rio Fanes forms long and spectacular rapids (chance to return on footpath no. 10).

Continue close to the bed of the stream sometimes in a dense forest and sometimes in a more open, blueberry covered forest. This takes you quickly to the last and spectacular Sbarco de Fanes fall with truly wonderful view over the falls above all in spring when snow melt water considerably swells Rio Fanes. A brief equipped path which can be avoided with a path to the left takes you unexpectedly along a ledge behind the waterfall before climbing a few metres and arriving at the end of the first section of the itinerary.

Anyone wanting to can then descend to Pian de Loa, returning to Ponte Outo on footpath no. 10 or by the main road.

Second and third part
If you want to continue into Val Travenanzes, after descending by gravel track for about 1 km, take a footpath on the right (take care to follow the signs) passing through the Progoito forest with its many trenches to cross the Rio Travenanzes gorge on the Acquarone bridge.

Climbing briefly up the right bank takes you to footpath no. 401 to Valle Travenanzes which you are best advised to follow uphill for a few hundred metres to the base of Landro where you find an interesting under rock shelter. Returning again you cross Bosco dei Cadorìs as far as the Ru de Ra Ola ford. From here you can easily turn back to Ponte Outo on the Ponte dei Cadorìs bridge below and Cason dei Lagusciéi.

Ignoring the descent mentioned above and also footpath no. 408 for Passo Posporcora takes you horizontally along a trench towards the Ru de Ra Vales gorge. A brief climb amongst blueberries takes you into the gorge across an opening, through an area with rocky boulders climbing up the valley to the base of an attractive waterfall. Zigzagging up a steep gorge to the right takes you back up to the upper edge of the gorge and footpath no. 408 which should be followed in a left ward direction. Just before the Ru de Ra Vales bridge, a brief turn off to the left takes you to a splendid sequence of evorsion hollows on the bed of the stream.

From the junction near the bridge, the circuit can be completed by descending to the right along footpath Ria Longa traversing the western slopes of Col Rosà. The footpath takes you back to the Val di Fanes road once again and 1 km further down to Ponte de Loa on Rio Fanes.

All that remains is then to return to the car park at Ponte del Felizon or climb up to the Torniché car park.

There are five brief sections equipped with metal cables which require ferrata equipment and three equipped sections at Cascate Basse, one at Sbarco di Fanes and one at Cascata del Ru de Ra Vales.
You can do the whole route in any case, avoiding the equipped sections, taking Ponte Outo on the outward journey and avoiding the Cascate Basse crossing.
Periods with storms are in any case to be avoided because of the chance of encountering sudden swollen streams as well as the winter period when there may be ice on some of the exposed sections.
Considering that the itinerary comprises exposed sections, however wide and non-slippery, vertigo sufferers should avoid the route.

Eight kilometre circuit from the Pian de Loa junction, more than 1.5 km to the entrance to the Parco del Ponte Felizon or 1 km from the Sant’Uberto (Torniché) car park. Overall 9-9.5 km.
A whole day is required for the complete circuit. The first or second circuit re-entering from Bus de l’Orso or Ponte dei Cadorìs taken alone requires a good half day.

600-700 metres uphill overall depending on whether or not you do the Cascate Basse equipped footpath.
If the route is split up into two distinct trips, a 300-400 m. climb for Val di Fanes and a further 300 metres for the Travenanzes and Ra Valles valleys.

From June to November. In spring – at the beginning of summer, during snow melt, the streams and waterfalls are spectacularly full of water.

Related post:
The legend of the Knight of Brack.