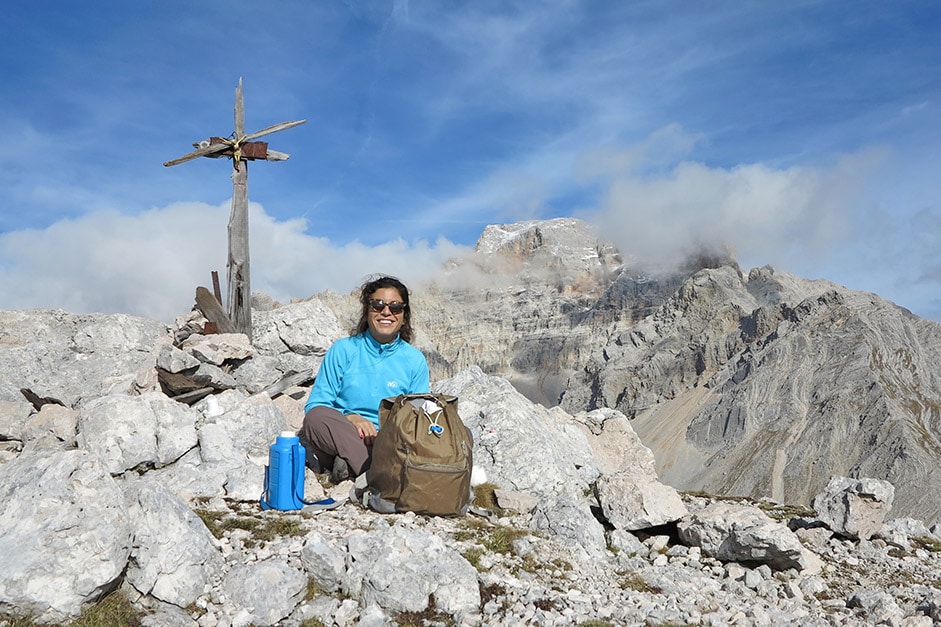 In search of a quiet and solitary place, Croda d’ Ancona

In contrast to many years ago when mountain people made their living from pasture and agriculture, today Cortina’s economy is based mainly on tourism which has undoubtedly brought wellbeing and a certain wealth with it. There is a flip side to the coin, however. In peak season the mountains are frequently invaded by crowds of tourists who turn its most beautiful aspects on their heads: silence and peace give way to the noise and confusion that these tourists bring with them as they escape from the cities to find themselves reproducing here what they don’t seem to be able to do without.

The easy and panoramic route which leads to the pleasant Rifugio Nuvolau is turned into a pedestrian walkway which is not entirely different from a crowded city street and enjoying a plate of good food at Malga Ra Stua means taking one’s place in the midst of children playing noisily, elegant ladies who never stop chatting and mobile phones with the most improbable ring tones going off continually.

Someone has said that mountains are silent teachers which teach silence but evidently no-one is listening to these teachings today.

Luckily, however, there are still many people who know how to learn from and enjoy what the mountains offer us and love to walk through forests and rocks on footpaths unknown to the majority.

It was the middle of August when Marco and I took ourselves off to Croda de Ancona (de r’Ancona), a solitary peak on the Croda Rossa massif, described on some maps under the name Monte Cadini.
This mountain, of almost no mountaineering importance, is very interesting in terms of war remains, its splendid panoramas and the peace and quiet it offers.

It is a truly simple climb suitable for everyone but it is not a numbered footpath and identifying it thus requires a minimum of experience.

In yellow, the path to Croda de Ancona

From Malga Ra Stua a convenient road built by the Austrians in the Great War takes us to Forcella Lerosa (2020 metres and also called Sella di Gotres) in under an hour.

Just before reaching the green pastures of Lerosa, having just come out of the woods, the route leaves the track and turns right to cross a clearing which follows to the rocky base of Croda de Ancona. Here the path turns sharply south-west and climbing gently takes us onto the mountain’s ridge.

Once on the ridge the footpath turns eastwards in the direction of the peak which is easily reached along rocky and grassy terrain. A few now faded red paint marks and occasional cairns help us to identify the route. A number of tunnels and many wartime ruins remind us of the courage and suffering of men obliged to live and fight on frequently hostile terrain.

This is what Antonio Berti had to say in his Dolomiti Orientali guide on the subject of Croda de Ancona: Already in early June 1915 the 23rd, 24th, 53rd and 54th infantry divisions attempted with great loss of life to break through this bleak defensive bulwark. With even greater spilling of blood, Cadore battalion companies and the 91st and 92nd infantry companies tried once again from 7th to 27th June 1916.

We thus arrive at the peak after 2 and a half hours from Malga Ra Stua at a very relaxed pace.

While the peak, at 2366 metres, is not a high one the panorama from it is in any case very beautiful and made more so by the almost total silence.

We stop a little, eat a sandwich which seems to us even better than the admittedly excellent cuisine at Malga Ra Stua and then set off to descend on the same route.

Once at Lerosa, in order to avoid taking the same route as we climbed up, we take a wide mule track, firstly even and then descending very steeply and briefly to Ra Stua, and having now been gratified by the silence at the peak we can stand the noisy refuge and enjoy a cool, foaming beer.

N.B. An interesting but more challenging alternative descent (CAREFUL: FOR EXPERIENCED HIKERS ONLY) is the eastwards route near the ridge. A rocky rib descends steeply from the peak for around 200 metres to a natural rocky hole called Buš de r’Ancona.
As occurs in other Alpine areas, this Buš too has its attractive legend which tells that it was opened up with the devil’s horns when he was driven energetically out of Ampezzo by the parish priest.

After passing this natural arch, follow the footpath trace in an eastwards direction and continue as it turns sharply north to Lerosa again. Whilst more beautiful, this route is certainly more challenging and not advisable for the less experienced.

DIFFICULTY
Easy. A minimum of experience on not always well signed footpaths is required.