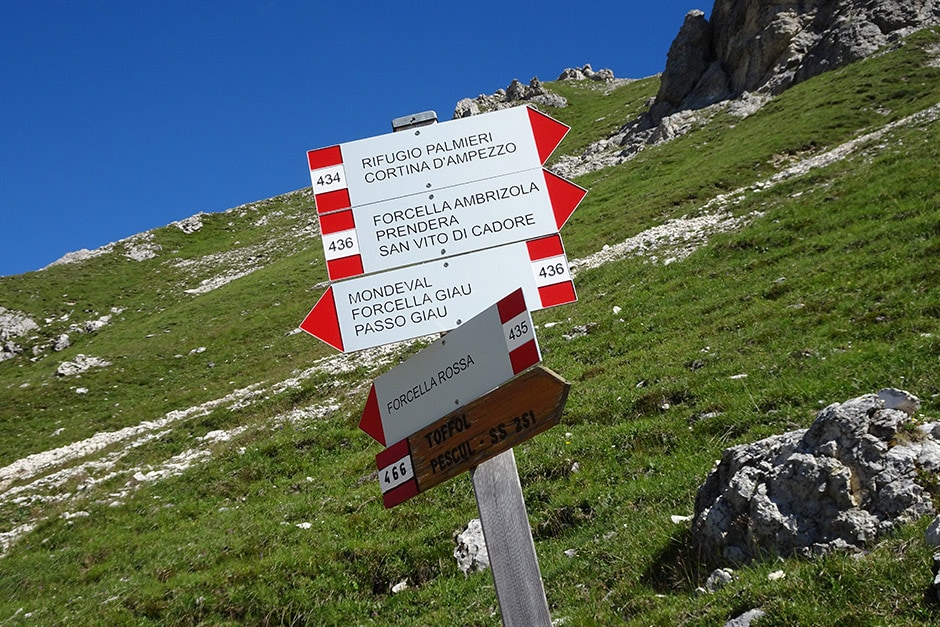 The Dolomites offer an exceptional variety of treks, from simple walks down in the valleys to long traverses high up at altitude.

The Croda da Lago ring close to Cortina is certainly one of the most rewarding outings due to its interesting geology and stunning landscapes; it begins in a magnificent fir forest, ascends the lunar Val de Formin, coasts the splendid Mondeval alpine meadows to reach the shores of beautiful Lake Fedéra before heading back down into the forest and starting point at Ponte di Rocurto. croda da lago ring

ACCESS
From Cortina d’Ampezzo take the road S.S.48 to Pocol (6 km), then continue on the S.P 638 towards Passo Giau. Continue up for another 4 km to reach Ponte de Rucurto (1708m) and park in the long layby.

ROUTE
Path No. 437 starts close to the layby, clearly signposted for Rifugio Palmieri at Croda da Lago and Val di Formin. Cross Rio Costeana using the bridge immediately below the road, then continue along the path. This is flat at first but then rises up through the forest and a steep hillock.

Continue upwards and quickly reach the point where the vegetation stops growing, then ascend rocky Val de Formin all the way to the saddle Forcella Rossa del Formin (2462m). As you ascend you can admire the magnificent Croda da Lago towers and, with a bit of luck, you may catch sight of some chamois deer as their run daintily over the scree.
Note: the summit of Monte Formin (2657m) can easily be reached from the saddle by following the obvious track to the top to enjoy a breathtaking panorama.

The path descends now and the views sweep onto the green Mondeval alpine meadows and the imposing Monte Pelmo bastion. In Mondeval the well-preserved skeleton of a prehistoric man dating back to 7500 years ago was found in the 80s. Click on the following link to find out more about the Mondeval Man.
At the end of the descent a flat section is followed by a quick ascent to Forcella Ambrizzola (2277m) located between Croda da Lago and Becco di Mezzodì. From here you can see Lago Federa (also known as Lago da Lago) for the first time as well as the mountain hut down below. The view onto Cortina and the ring of mountains surrounding the basin is truly magnificent from here.

Take the obvious track No. 434 down to the hut and savour the typical Italian mountain dishes. In summer time this is a highly popular walking destination and the Rifugio lies strategically for mountaineers climbing high on Croda da Lago and Becco di Mezzodì. Furthermore, the hut is also a stop-off on the Alta Via #1 walk, the most famous trek in the Dolomites.

GETTING THERE
Reach Cortina d’Ampezzo in the Italian Dolomites.