From Bolzano to Cortina, the Great Dolomites Road

The Great Dolomites Road – known in German as Die Große Dolomitenstraße and in Italian as the Grande Strada delle Dolomiti – is undoubtedly a work which has made a determinant contribution to the tourist development of this magnificent mountain area of northern Italy. Great Dolomites Road
This mountain road crosses the Dolomites passing through the South Tyrol, Trentino and Veneto.

Although certain sources give its starting point as Ora (BZ), the historic Grande Strada della Dolomiti more plausibly started at the small village of Cardano on a very sunny high plateau at the edge of the Ega valley – Eggental in German – just a few minutes by car from the capital of South Tyrol, Bolzano. In 1860 a road linking Cardano with Nova Levante through the Ega valley already existed but its higher stretches, such as Passo Pordoi for example, were simply paths and mule tracks.

This was the period in which a number of cart access roads were opened in the Dolomites such as the link road between the Ega valley and the Fassa valley in 1895 and the Val Badia access road in 1893. Great Dolomites Road
But the most significant road was undoubtedly the great Dolomite road which began in Bolzano and finished in Cortina d’Ampezzo across the Costalunga, Pordoi and Falzarego passes. 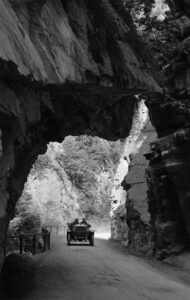 It all began when a provincial law voted to build the two Pordoi and Falzarego stretches in 1897, from Arabba to Canazei and Livinallongo to Cortina respectively. At the time the area marked the southern confines of the Austro-Hungarian Empire and thus the priority objective was military. But it wasn’t just this. The Austrian-German Alpine Club, whose local clubs had been an important driving force behind the building of high altitude refuges, gave strong support to the building of a vehicle access road between Bolzano and Cortina. The idea of the German mountain climbers was taken up with great enthusiasm by two pioneers of South Tyrolean tourism: Albert Wachtler and Theodor Christomannnos, president of the Bolzano Alpenverein the former and head of the Merano section the latter. It was Christomannos, in particular, son of a wealthy family of Greek traders who lived in Vienna, who grasped the importance of a road which would not solely provide access to the individual valleys but was also capable of linking up the whole Dolomite area.

Work began in 1901 and a grand total of 2500 workers set to work on building the road! It took eight years to complete the road, a relatively short time if we remember that the technologies and means at their disposal were a long way from our own.

Theodor Christomannnos, far-sighted tourism pioneer, launched the motto: “No hotel without roads, no road without hotels”, and thus hostelries and hotels were built along the road which were, however, requisitioned during World War One: Passo Pordoi (2,239 m) was, in fact, right on the border between the Austro-Hungarian Empire and the Kingdom of Italy. The commemorative obelisk built in 1905 with the figures relating to the Great Dolomites Road is still standing.

It was a very important event from both economic and symbolic points of view in that it marked the definitive opening of the Dolomites to international tourism promoted also via important literary work such as that by Karl Felix Wolff (Die Dolomitenstraße, 1907) and Christomannos himself (1909).

Subsequently the local population, used to harsh mountain life, could turn to new activities, thanks to the large numbers of tourists passing through the area, opening hotels and restaurants to cater for the growing numbers of tourists.
It can thus be said that it is also thanks to the building of this road that the Dolomites are the much loved tourist destination they are today.

More than 100 years since it was built, the Great Dolomites Road is still today bringing people to admire enchanting landscapes surrounded by internationally unique mountains.

But we can’t ignore the flip side either and I believe that it is important to stop and think about the changes – and not all of them positive – that have taken place in the Dolomites. The boom in cars and even more motor bikes is a constant, frequently uncontrolled, consequence of mass tourism.

The Grande Strada della Dolomiti connects up Bolzano and Cortina d’Ampezzo. I’ll describe the route here starting from Bolzano but obviously it can also be done in reverse, starting from Cortina.

In some sections it is very narrow and steep with hairpin bends and requires you to drive with great care. I would advise against driving it with a trailer attached to your car.
A great many panoramic points and car parking areas give you breathtaking views over the Dolomites around you.

You can see the majority of the main Dolomite peaks from the Great Dolomites Road and for this reason I advise you to take a whole day over these 110 kilometres of tarmac road so that you can stop as often as you want to admire the view, go for a little stroll and enjoy the splendours of this mountain world.

Tom Phillips, photographer and mountain lover, has taken on an interesting task: with careful research he has collected a great many period photographs taken at the places the Great Dolomites Road passes through and matched them up with photographs he himself has taken on the same spot today.

This work gave rise to a site which, in addition to celebrating the excellent photography of Antonia Verocai Zardini, one of the first great Dolomite photographers, also shows how much the area has changed. See link at the end of this page. 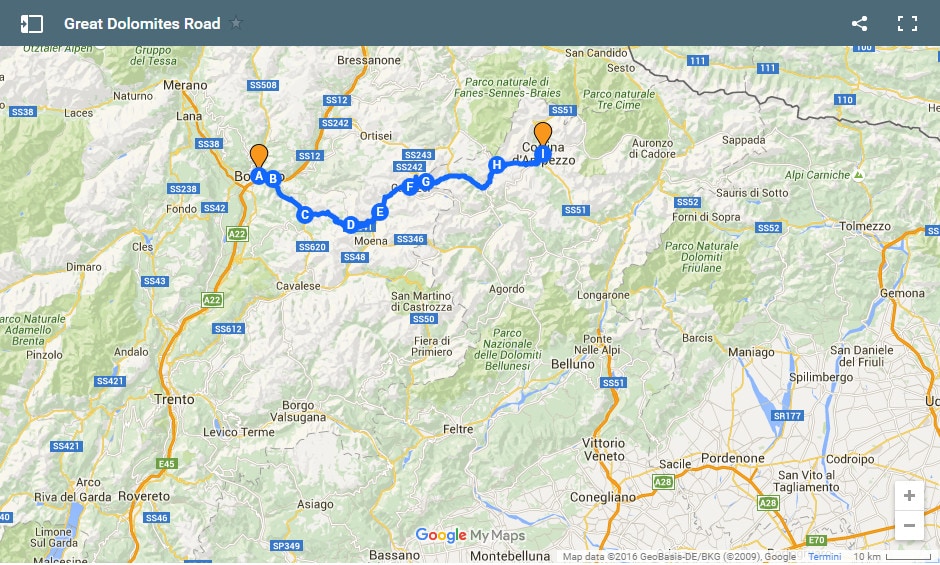 1. Empress Elisabeth of Austria and Queen of Hungary (1837-98), called Sissi, spent a period of rest at Grand Hotel Carezza in August 1897. She was by then no longer the beautiful sporty young woman she had once been but a sick, melancholy and very lonely woman. To get her strength back she customarily took long walks in the area. Great Dolomites Road

Elisabeth’s stay was on the advice of her personal doctor who organised for the transformation of the complex into the Empress’s summer residence together with Theodor Christomannos, exponent of the Carezza project.
18th August, the Emperor’s birthday, was celebrated with a great feast in the residence’s hall and it was a great social and patriotic event.

On 24th August 1897 Sissi went for a walk past the Nova Levante dairies to the Zenay farmhouse. The itinerary has been called the Elisabeth Walk ever since. Almost exactly a year later, on 10th September 1898, Sissi was assassinated in Geneva.

The fame of Residence Grand Hotel Karersee spread beyond the borders of Europe and in the early years of the next century tennis courts and a 9 hole golf course were built there on American plans. A favourite with the aristocracy and bourgeoisie, the Grand Hotel was razed to the ground on the night of the 15th of August 1910 which luckily caused huge damage to the building but no loss of life. It was almost immediately decided to rebuild the hotel and the building’s new incarnation was completed just two years later with a grand total of 350 rooms and almost 500 beds. 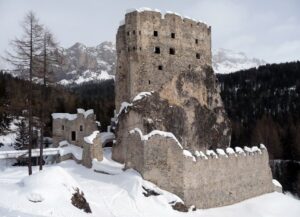 2. Andraz castle was built on a huge boulder transported to the valley during the last glaciation and dominating the valley. It was a strategic point from which to control the roads from the south (Belluno, Agordo, Caprile), north (Bressanone and Castel Badia, San Martino in Badia, Valparola) and Ampezzo over the Falzarego col.
The first historical references to it date to just after the year 1000 and it is known that in 1221 it belonged to the Schoneck family (Colbello) who were granted it as a fief by the Bishop of Bressanone. It remained the property of vassals of the Prince Bishops until the 15th century when, in 1416 the Bishops of Bressanone took full control of it.

After that, until secularisation imposed by the Treaty of Paris of 1802, the castle remained in the bishop’s hands and was used as the headquarters for small military garrisons under the command of a captain. Nicolò Cusano, bishop of Bressanone, was undoubtedly Andraz’s most illustrious guest and he chose the castle for long stays between 1457 and 1460 to ensure his safety. 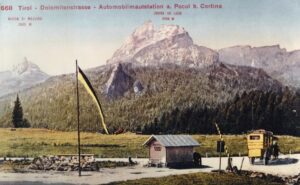