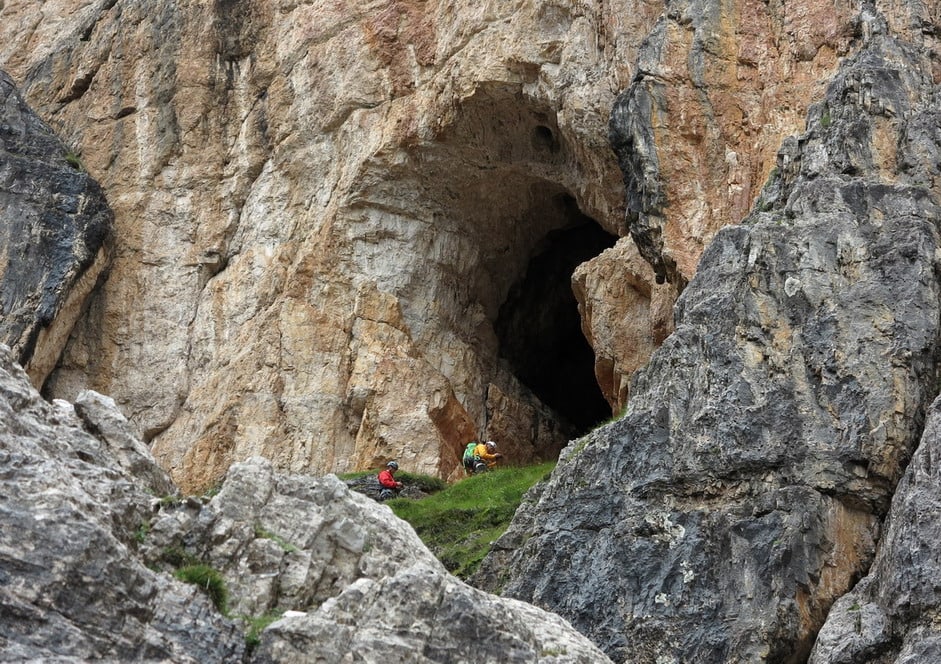 During the mid-half of latter century the GTofana grotto was a highly popular outing with visiting tourists, now though it is has fallen into disuse. I believe though that the walk and ferrata remains a highly interesting outing, above all in spring when temperatures rise and hundreds of spectacular stalagmites form in the cave thanks to the water dripping from the roof.
Thanks to this natural phenomena the cave transforms into a fairy-tale, a true natural wonder.

This original and natural grotto on the lower bastion of the Tofana di Rozes is one of the few caverns which have formed in Dolomia Principale and not in limestone. The grotto spirals for circa 300m and in some sections the roof is over 10m high.

The Tofana grotto is reached via a ledge which has been equipped with steel cables. Although this section presents no technical difficulties, it is nevertheless exposed and as such a via ferrata kit is highly recommended. the grotta di Tofana

From Cortina d’Ampezzo take the SS48 towards Passo Falzarego and turn off right to reach Rifugio Dibona.

Take path n. 403 towards Rifugio Giussani. Reach the Giussani lift quickly and leave path n. 403 and follow n. 442 and signs for Via Ferrata Lipella. Reach the base of the imposing Tofana rock bastion and join path n. 404. Follow the “Grotta della Tofana” marker and scramble up the scree slope to reach the gully. Ascend this for circa 50m to reach the steel cable on the left. Calculate approximately 40 minutes from Rifugio Dibona.

Despite being an easy outing, the fact that there is a steel cable means that this itinerary falls into the Via Ferrata category. The obvious ledge leads from east to west in circa 15 minutes to the cave entrance, located at circa 2430 m. In the cave there are some metal steps: follow these to explore the grotto. the grotta di Tofana

Descent from the grotto

Once you’ve finished visiting the grotto, return via the same path.
Alternatively, instead of returning directly to Rifugio Dibona descend the gully at continue along path n. 404 to reach the base of the Col di Bos and then descend along the path n. 402 to join up with path n. 412 which leads back to Rifugio Dibona via the Alpe Sotecordes (approximately 2 hours).

A visit in spring provides a unique spectacle, but also comes hand-in-hand with some dangers: the gully prior to the steel cable is usually still filled with snow and requires special attention.
Furthermore, make sure you leave early as with rising temperatures there is an elevated risk of rockfall, above all in the initial gully. Take a helmet!