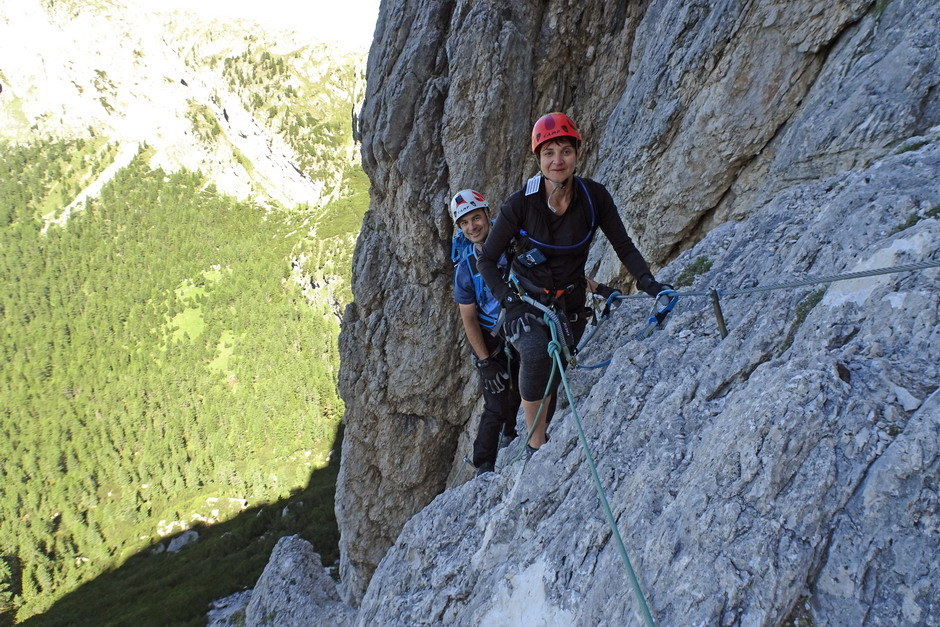 An easy via ferrata of great historical interest

Ferrata Fusetti on Sass de Stria was set up in the summer of 2018 by two teams of Alpini soldiers looking for the remains of second lieutenant Mario Fusetti, gold medal for bravery winner.

The ferrata is located on the south-west face of Sasso di Stria (2477 metres), a modest peak as compared with the great Dolomite mountains, but one with equally marvellous panoramas. There are two possible access routes to the ferrata, one longer than the other.

Here I will describe the shorter access route which begins at Forte Tre Sassi. A downhill footpath takes us to Edelweiss Stellung.

From here, circuiting the mountain in an anti-clockwise direction we soon reach the Sasso di Stria ferrata.

Before describing the access route in detail I will point out that the brief access route traverses a highly exposed ledge which is only minimally equipped.
It is thus essential that you are sure footed and used to walking on this type of path.

GENERAL ACCESS
From Cortina d’Ampezzo or Val Cordevole get to Passo Falzarego and from here to Forte Tre Sassi, also called Intra i sass on Passo Valparola, between Passo Falzarego and Val Badia.
Those coming from the Badia valley will have to continue through San Cassiano and Armentarola to Rifugio Valparola. A further 500 metres takes you to the fort. Between Sasso di Stria and Piccolo Lagazuoi, the fort is now a Great War – World War One – museum.

ITINERARY
Readers are encouraged not to park in front of the museum but to use the large open area to the east of the fort where the footpath begins. Currently the Ferrata Fusetti on Sasso di Stria access route is not well marked but it is, in any case, relatively easy to identify.

The path is initially steep and then continues into a valley and climbs more gradually to Edelweiss Stellung, the edelweiss position.

This is a former army village made up of various huts, six of which have been beautifully rebuilt in recent times by volunteers. After the first of the huts, leave this village to your right and continue in descent along a footpath which soon gets steeper. Alternatively, explore these renovated Edelweiss Stellung huts which are worth a visit.

The route circuits the base of Sasso di Stria in an anti-clockwise direction to the narrow ledge mentioned above. A chain gives greater protection on the most exposed section.
Now the path begins to climb and quickly takes us to the start of the ferrata which is well marked with a red paint sign on a stone. This is the start of the Sass di Stria ferrata.

It is not an especially challenging ferrata and around 240 metres long. It is a recent construction and there are thus many unstable rocks along it. Be especially careful not to dislodge them – there may be walkers below.

Above, alongside the metal cord, many of the caves carved out during the war indicate the end of the ferrata. From here, along trenches and nooks and crannies, a well signed footpath gets you to the peak of Sasso di Stria where the views are wonderful.

For the descent return along the uphill footpath and continue through the trenches along the Sass di Stria ridge to the fort.

FROM THE END OF THE FERRATA TO THE PEAK
Around 30 minutes.