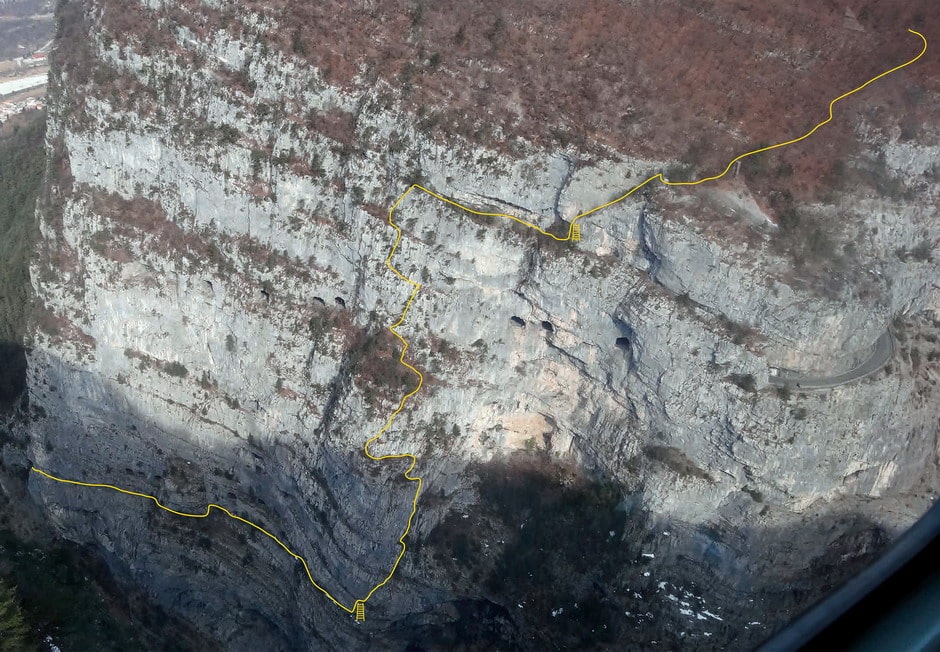 Via ferrata del Vajont, a different way to remember the Vajont disaster

Via Ferrata della Memoria, also referred to as Via Ferrata del Vajont, is a new via ferrata based on an idea by Fabio Bristot, a member of the Bellunese Dolomites Mountain Rescue squad who wanted to remember the Vajont tragedy through this new route.

The ferrata was financed thanks to the “SaferAlps” cross-border project which designs safety aspects of vie ferrate in the province of Belluno and the rest of the Alps. Fundamental support was provided by DolomitiCert, CAI Veneto, the University of Salzburg and the Mountain Rescue Service.

The Cortina Mountain Guides built the Ferrata del Vajont, applying their know-how gained through decades construction and maintaing some of the most famous via ferrata in the Dolomites, situated mainly around Cortina d’Ampezzo.

This is a different way to remember the Vajont disaster that struck on 9 October 1963. As of 2 October 2015 the Vajont dam can be viewed at from a different angle, namely a sports perspective. Observing the slender and somewhat alarming shape of Vajont dam will enable those who ascend the ferrata to reflect on past mistakes and look towards the future of an area, located on the border between the Veneto and the Friuli Venezia Giulia, that has a great tourist potential.

The new via ferrata runs along the right bank of the Vajont gorge, through the municipalities of Longarone (BL), Castellavazzo (BL) and Erto (PN).

How to get to Ferrata del Vajont

From Venice drive north along the motorway to reach Longarone.

ACCESS
The start of the new ferrata can easily be reached via the 251 state road that leads from Longarone to Erto. From Codissago drive up to the 6th hairpin bend and signpost for the ferrata. Turn off the main road and continue right along the narrow road that, after circa 100m, leads to a car park. Leave the car here, the path start on the right close to a tunnel.

ROUTE
Descend for a few meters to reach the spectacular gully that brought water from river Vajont to the Codissago mill at the end of 1800.

Continue up this gully to reach the first tunnel, circa 150m long, head torch recommended. This leads to ledge, equipped with steel cable, another shorter tunnel and a second, more exposed but easier ledge. This leads to a ladder that marked the start of the difficulties; the first 100m are demanding and exposed.

Immediately after this, thanks to a series of ledges, the ferrata del Vajont leads to the central ledge and the second vertical section. Although difficult, it is less demanding than the previous vertical section, and then leads rightwards to another ledge and second ladder. From here it continues to a notch in the rock, built for the cable car that transported concrete from Longarone for the Vajont dam. Proceed from here for a further 5 minutes to reach path no #380 that leads to the Vajont dam. By turning off left you can return to the starting point.

In total the ferrata del Vajont is comprised of 600m in the starting gully, followed by another 60m on the vertical sections.

DESCENT
a) Walk down the Troi de S. Antoni: 1 hour circa.
b) Walk along the road SR 251 to the last tunnel, then turn left (SW) and follow the path, 45 minutes circa.

After the beautiful crag of Erto, thanks to the new Ferrata del Vajont this area of north Italy become even more a great place for mountain lovers.