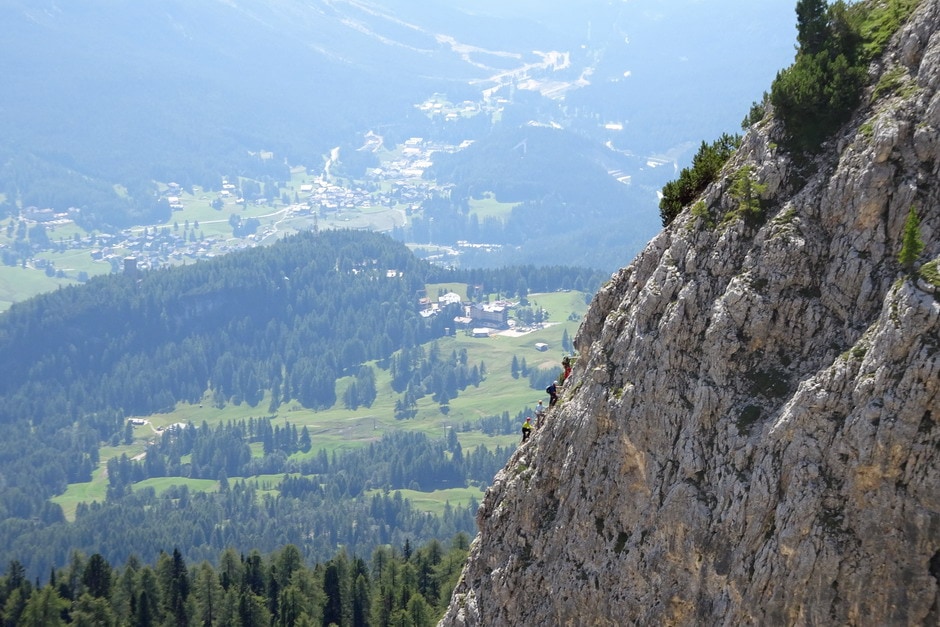 Ra Pegna is the name of a rocky tower which, together with Ra Bujela, rises to the side of the Schuss, the steep gully which the athletes competing in the World Ski Cup downhill whizz along in winter.

An easy via ferrata was put in in June by Cortina’s Alpine guides which is ideal for those starting out on vie ferrate for the first time and just getting used to ropes and carabiners and vertical terrain.

The Ra Pegna ferrata completes the range of the area’s summer mountain activities and offers a short and easy ferrata to the large numbers of hikers who flock to the area giving beginners in particular a place to get familiar with equipped routes without too many difficulties and fears.

It is a straightforward ferrata created ad hoc for users taking on this type of route for the first time, a sort of gym and suitable for children, too, as long as they are accompanied by experts and roped on.

The term Ra Pegna is the Ladin translation of zangola, a cylindrical or conical wooden recipient used to churn up cream and transform it into butter. Now supplanted by industrially made butter, the zangola was commonplace in the farms and rural buildings of northern Italy until the mid-20th century.

The cream was poured into the cylinder which was sealed with a disk and plunger and then churned up with the plunger. Butter making required a few hours of continual churning.

The “Ra Pegna” and “Ra Bujela” (needle, once again in Ladin) rock towers rise up at the foot of Punta Anna and the Pomedes tower in the Tofana massif.

It is Main Dolomite for the most part and dates to the Triassic. As far as the environmental sustainability of the equipped routes of Ra Pegna and Ra Bujela are concerned, they are ultra-low environmental impact requiring very limited earth movements and no tree cutting and can easily be removed allowing the place to be returned to its natural state.

The Ra Pegna via ferrata, like that of Ra Bujela, is a valid alternative to the longer or more challenging routes on mixed weather days when the area’s other ferratas are not safe (see ferrata Olivieri alla Punta Anna, ferrata alla Tofana di Mezzo, sentiero Olivieri).

GENERAL ACCESS
If you plan to just do via ferrata de Ra Pegna, the fastest way to reach the start of is to use the chairlift Piè Tofana – Duca d’Aosta.
After getting off the ski lift walk downhill for a few metres and then climb up the ski slope, staying to the left of the Rifugio Pomedes lift.

Continue for a further 250 metres to the signs indicating the beginning of the ferrata.
When this is closed, Rifugio Duca d’Aosta can be reached by car.

Those who wish the link the Ra Bujela via ferrata with sentiero Olivieri should take the chairlift, do the two ferratas and then descend to Col Drusciè by cable car. From here return on foot to Piè Tofana in 15 minutes.

ITINERARY
This via ferrata climbs along the rock face’s weak points and gets you to the peak ridge in a short time. From the ridge, after a short downhill section on a straightforward 4 metre approx. rung ladder you reach the footpath which takes you back to the valley or to Rifugio Pomedes which is just above you.

TIME
From Rifugio Duca d’Aosta reach the start of the ferrata in less than 10 minutes.

RELATED POSTS
Learn more about the via ferrata
Ferrate open/closed