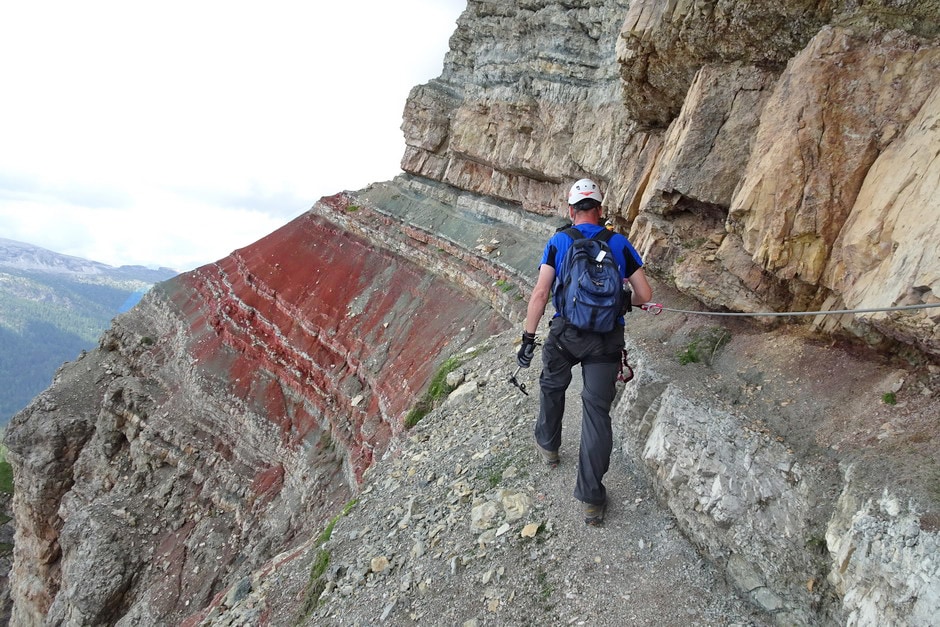 The Sentiero Astaldi is one of the oldest equipped path in Cortina. Despite being an easy outing, the fact that there is a steel cable means that this itinerary falls into the Via Ferrata category.
The Astaldi ferrata is devoted to Maria Luisa Astaldi, writer, journalist and literary critic.

This easy via ferrata develops across one of the most characteristic and spectacular dolomitic landscapes and gives the opportunity to visit one of the paleontological sites that have reserved recent discoveries of extraordinary scientific interest, like the most ancient ambers of Europe.

At the foot of the big walls of Dolomia Principale formation of Tofana, above Dibona Mountain Hut, there are thin clayey strata, clearly red and alternating with brown rock walls: it is the Raibl formation (220 million years), witnessing an environment characterized by lagoon sedimentation, during which, in a subtropical climate, the territory was formed by low and salty waters alternating with emerged holms where ancient species of resinous plants used to grow (Read more here).

Having said that, it’s now time to return to the topic of this post, namely the description of sentiero ferrato Astaldi. It crosses horizontally the colorful Raibl’s strata, clearly visible in all their beauty, making the route really interesting. In the Ampezzo dialect, this area is known as i roš (the reds).

The Astaldi can either be an independent itinerary or be combined with others easy ferratas such ferrata Ra Pegna or the Grotta di Tofana.

WARNING
Although easy and without technical difficulties, the sentiero Astaldi must be approached with care and with the via ferrata equipment.
Helmet is highly recommended: the route is exposed to rocks fall, due to the bad quality of the friable rocks that overhang the path, as well as the crossing of some gullies.

The route can be done either clockwise or counterclockwise. Below I describe the route in an counterclockwise direction. The via ferrata is essentially horizontal with modest ups and downs, and does not present any technical difficulties.

GETTING THERE
The route, as described here, starts and ends at Rifugio Dibona, which is reached off of a small winding side-road, initially paved, then gravel. From Cortina d’Ampezzo take the SS48 towards Passo Falzarego and turn off right to reach Rifugio Dibona (2083m).

ACCESS
Take path 421 towards Rifugio Pomedes, until it reaches a junction with the Sentiero Astaldi.
In a short time you reach the ledge with the metal cable, where our easy via ferrata begins.

DISCESA
The Astaldi path ends on a grassy hill, a magnificent viewpoint on the imposing wall of the Pillar of Tofana di Rozes and on the southern side of the Valle d’Ampezzo and the mountains that rise above it.
The trail continues in the Valon de Tofana where an easy descent takes us back to the Rifugio Dibona.

ACCESS TIME
From Rifugio Dibona reach the start of the ferrata in 20-30 minutes.