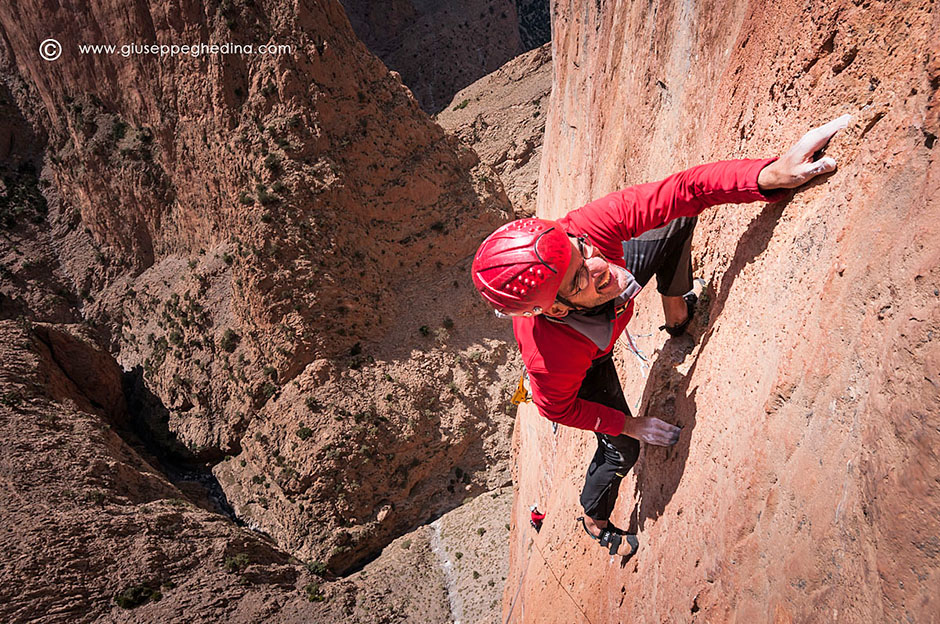 The superb limestone of Taghia

OVERVIEW taghia rock climbing
In September 2009, I went to Morocco with my friends from the “Scoiattoli di Cortina” group (the Squirrel Group, one of the most famous climbing clubs in Italy). The purpose of our trip was to open a new route on one of the incredible walls of the Taghia area. The group arranged the trip to celebrate the 70th anniversary of the founding of the Scoiattoli.

How do I get to Taghia?

Our base to reach our goal is Marrakech. The city is in the center-south of the country, about 150 km from the Atlantic Ocean coast. We spent our first afternoon in Africa here, visiting the old city, the medina enclosed within the walls, to the west of which the new city rises. We could not miss a visit to the labyrinthine souk (market) and famous Djemaa el Fna Square which the old town fans out from and it is the bustling and absolutely characteristic center of Marrakech.

The next day, after loading luggage and material onto our off road vehicles, we began our journey to Zaouia Ahansal (there are about a dozen different ways to spell this – it is pronounced zaa-we-ah), the last village with road access. This transfer took about 6 hours, the first two on paved roads and the rest on dirt roads, mainly through desert.

In Zaouia Ahansal some men with mules were waiting for us and these were indispensable for transporting the heavy load of ropes, bolts, climbing gear, food and clothing we needed.

After many hours in the jeep we were all looking forward to being able to walk around a bit and stretch our legs and we moved briskly toward Taghia whose spartan shelter we were to stay in for a dozen days.

The Zouîat Ahansal valley is the entranceway to the Taghia circus where the small village of the same name with its 400 inhabitants, located at 1900 meters above sea level and accessible only on foot, is to be found.

Thanks to an intelligent network of irrigation canals, the valley’s spectacular and abundant water sources offer relative prosperity to the village’s residents.

The village is surrounded by amazing rock faces and located in the heart of one of the most isolated regions of the Atlas mountains, the great limestone plateau of Azilal which is crossed by three major canyons: n’Tazart Akka, Akka and n’Taghia Akka n’Tafrawt with some peaks over 3000 metres in altitude. The canyons are just a short stroll from the village with walls varying in height from 300 to 900 meters.

The first routes in the area were opened in 1975 by a group of French climbers including Bernard Domenech (currently one of the top experts on Africa mountaineering) and Erik Dechamp.
In the 80s and 90s the area was mainly popular with Spaniards who opened up a number of big walls and stayed on them as long as a week at a time.

Some excellent routes were then opened by another group of French climbers led by Remi Thivel and Christian Ravier.

These climbs are difficult and have very few bolts, all of which are on walls between 400 and 600 metres in height.
The first modern routes were opened by Spaniard Toni Arbones and, in May 2003, by the trio Michel Piola, Benoit Robert and Arnaud Petit. The latter have left Taghia some true climbing gems including some beautiful climbs. I like to remember “Les rivieres pourpres” – 600 m – max 7b +.

In recent years many modern, fully equipped routes have been opened. The rock is a fantastic, highly abrasive limestone which can consume even the toughest calluses in a few days.
Despite this Taghia is unknown to almost all European mountaineers.taghia rock climbing

There is a great guidebook to Taghia’s climbs: “Taghia Montagnes Berbères” by Christian Ravier (mail: cravier [at] club-internet.fr).
In the Tawjdat hut (Gïte) there is also a big book containing handwritten sketches and reports of the most recent routes.

Our route – Via 70° Scoiattoli

As the territory is very vast offering a host of possibilities to those who want to open new routes, we devoted our first few days to looking for a mountain to trace our new route on.

Obviously there is no lack of rock in the area, but aesthetics, the time required to approach the wall and the beauty of the line of the ascent play an important role in a successful enterprise too.

After searching the area carefully, we opted for the south face of Mount Oujdad which can be reached in less than two hours from the village.
At this point it was necessary to find a base to set up camp in because walking to the rock face from the village every day would have been a great waste of time and energy. After some research we found a cave that was well suited to our purpose.

It was a short distance from the start of the route and a stream provided us with the necessary water.

The following days were dedicated to our new route. The opening of the new route, dedicated to Scoiattolo  Luigi Ghedina “Bibi”, took a week and the result was excellent. The line traced a leftwards route from the “Barracuda” route which it joins and has a last pitch in common with it. The rock is exceptional and extremely difficult. A short section of the 5th pitch was not a “free” climb and its difficulty level has been estimated at 8a + / 8b.

The climb is fully equipped with bolts. Trad gear can be helpful if you are going to ride the last part of the “Baraka” route.

Both Gites offer meals. It is recommended that you sterilise all water before drinking – even ‘drinking’ water – as severe stomach upsets have been commonly reported by visiting climbers. We used a substantial amount of ciprofloxacin to keep our health problems at bay – it may be worthwhile stocking up on this or other antibiotics.