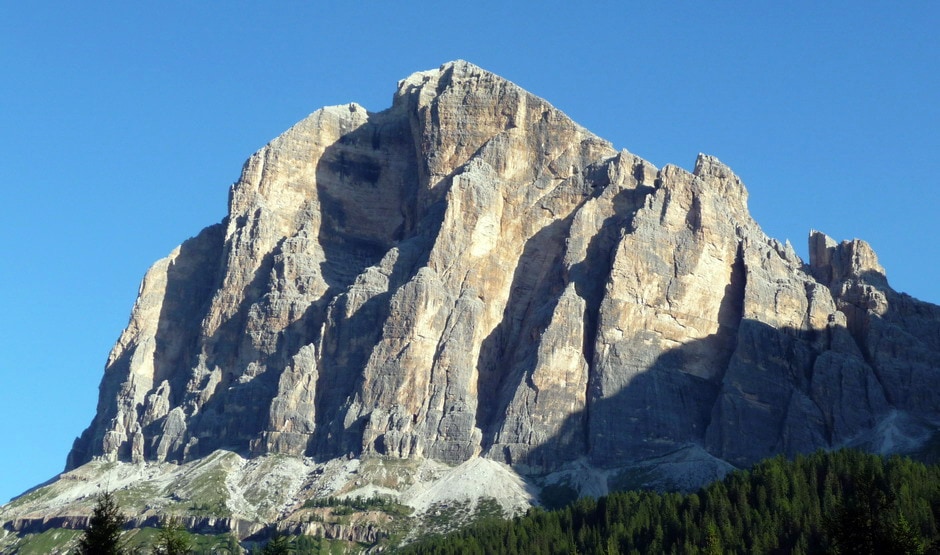 On the Pilastro della Tofana di Rozes in the Dolomites Massimo Da Pozzo, Natasha Alexander and Samuele Majoni have made the first ascent of Spigolo Sam (6c, 500m circa). With all belays equipped for the abseils and its south facing orientation, Spigolo Sam is certainly an interesting outing on one of the most famous rock faces in the Dolomites.spigolo sam tofana

Here’s a great new mid-grade offering for those looking for a pleasant rock climb in the Dolomites.
Partly because the route ascends the famous Tofana di Rozes pillar and, partly because it was first ascended by Massimo ‘Mox’ da Pozzo who, there can be no doubt, is a bit of a connoisseur of those rock faces and beauty applied to climbing.
So Spigolo Sam, the arête named after the most recent addition to the Da Pozzo family, came about last summer by daddy Mox, by Natasha Alexander (mummy of Sam as well as wife of Mox) and by Samuele Majoni who, just like Mox himself, is a member of the famous Cortina-based Scoiattoli mountaineering club.
The 500m line ascends difficulties in the region of 6b (5 pitches) and is seasoned by two 6a pitches, a few sections of grade 4 and 5+ and, slap bang in the middle, by a zesty 6c. The hallmarks: a beautiful crack on the first pitch, its excellent rock quality and the fantastic climbing (in line with the entire Pilastro di Rozes).

Spigolo Sam starts to the right of the historic route Via Costantini – Ghedina and climbs up to the ledge at half-height (the famous mule’s back breached by the even more famous route Costantini -Appollonio) and then bears left to join the Costantini-Ghedina for a pitch and a half before continuing on independently.

This shared section, explained Massimo da Pozzo, was necessary for two reasons. Firstly because continuing straight up off the ledge would have meant climbing through the yellow overhang and its very poor rock (the worst on the entire face). And secondly because in doing so the difficulties would most certainly have changed drastically, resulting in inconsistent grades and a less beautiful climb.

Talking about beauty and climbing… with all belays equipped for the abseils and its south facing orientation, Spigolo Sam is certainly an interesting outing on one of the most famous rock faces in the Dolomites. The route can also be climbed at the start of the season, when the classic descent on foot is often blocked by abundant snow. One word of warning though: Mox recommends you take a set of camming devices which may be found useful to integrate the pro on the beautiful starting crack, and also on the easier grade IV and V pitches… And if he says this, take heed! spigolo sam tofana

From Cortina d’Ampezzo reach Rifugio Dibona, at the foot of the Tofana di Rozes. This is reached from Cortina by driving towards Passo Falzarego, past Pocol and few hairpin bends, and turning off right up onto the dirt track following signs for the refuge. spigolo sam tofana

10 quickdraws, two ropes (usuful for an abseil off the route), a selection of nuts and mid-sized camming devices.

Descend as for all other routes on this pillar: follow obvious tracks north to reach Rifugio Giussani and then descend back down to Rifugio Dibona (1.15 hours circa). spigolo sam tofana