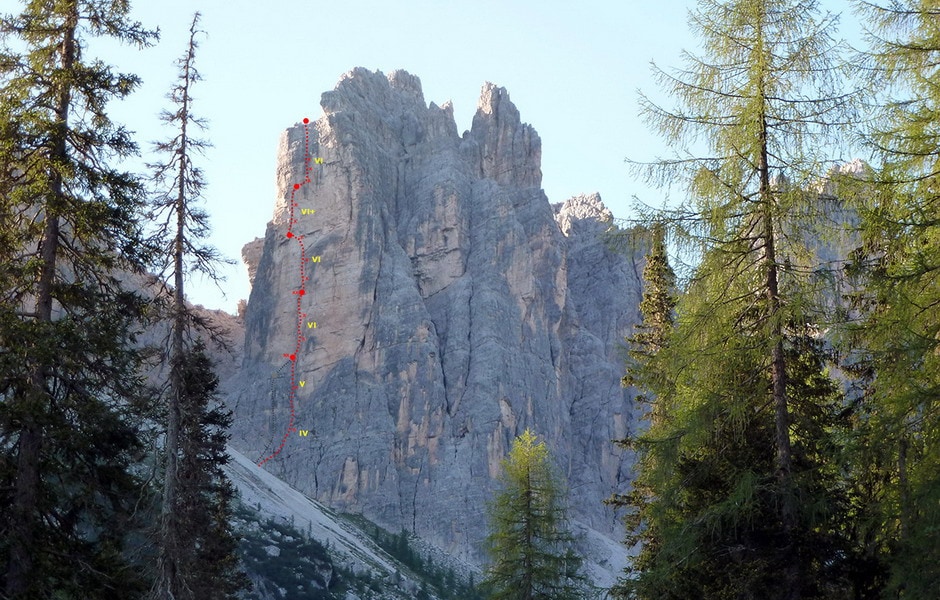 Diedro Fouzìgora, the rebirth of an old route on Cason de Formin

In August 2013 the tireless Massimo Da Pozzo and his friend Samuele Majoni chose to restore a great, old route to its former glory: Diedro Fouzìgora. Established on 20 August 1944 by Marino Bianchi Fouzìgora and Dino Menardi Selo up the North Face of Cima Cason de Formin, this route has seen very few repeats in the past, possibly because the first ascentionists left only 4 of the 38 pegs they used in-situ.

Since the route offers some great climbing the two members of the Scoiattoli climbing club decided to retrobolt the route and the final two pitches don’t follow the original line chosen by Bianchi and Menardi but climb slightly to the left.

Thanks to Massimo and Samuele we can now safely repeat this route: all belays are quipped with twin bolts and some bolts have also been placed along the pitches.
Per arrampicare in sicurezza sono comunque necessari alcuni friends, fino alla misura 3 (blu) dei Camalot Black Diamond.

Massimo da Pozzo recommends avoiding pitch 1, not great fun and on poor rock, and instead climbing the first 6a pitch of “Buon compleanno Nat“, past its first belay to reach the first belay of Diedro Fouzìgora.

From Cortina d’Ampezzo drive towards Passo Falzarego to Pocol. Shortly after this, head left and take the road # 638 for Passo Giau. From the fork at Pocol drive for 4 km and park at the narrow lay-by. From here walk left (south) along the popular path that leads to Rifugio Palmieri and Croda da Lago.

Follow path #437 towards Rifugio Palmieri. At the Cason de Formin fork (1848 m) head right along path #435 towards Forcella Formin. When the path steepens, leave this at hairpin bend that turns back right, and continue along the obvious track the leads off leftwards , before scrambling up towards the base of Cason de Formin. Reach the base and continue left up the scree to quickly reach the start of the route (1.10 hours).

Walk along the ledge eastwards and descend left down the scree gully to quickly reach the start of the route (circa 30 minutes).

For the record, Fouzìgora was the nickname given to Marino Bianchi (nicknames are widely used to distinguish the various family members and avoid confusion) and in local Ampezzo dialect means grasshopper.