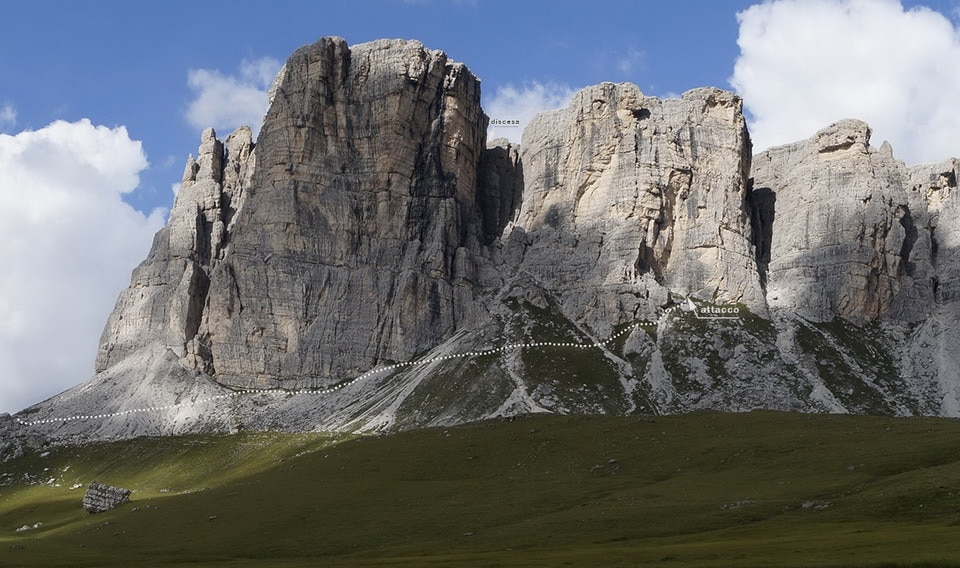 In October 2013 a new, relatively short multi-pitch sports climb was added to the second bastion of Mondeval, the beautiful pillar that together with the others forms the sunny south Face of Lastoni di Formin. The route in question is called Evergreen and was put up by my friend Bruno Sartorelli and by Danilo Serafini, two expert members of the Fiamme Gialle Mountain rescue team. While I don’t know Danilo well, Bruno and I have been friends for a long, long time. lastoni di formin

Bruno Sartorelli, a Mountain Guide and member of the Scoiattolo group, has always been one of the most talented climbers in Cortina; apart from numerous difficult repeats throughout the Dolomites and holding his own at the crag, over the course of the years he has also established numerous great new routes.

These include, amongst others, “Excusez moi… la va de qua?” put up in 2002 on the West Pillar of Lastoni di Formin together with Massimo Da Pozzo, the famous local climber and, like Sartorelli, a member of the Fiamme Gialle Mountain Rescue team.

But let’s get back to Evergreen, our route. As I mentioned earlier the climb isn’t particularly long but it offers great climbing up excellent rock.

Just one short section at the start of the fourth pitch is somewhat friable but in time this will be no doubt be cleaned.

Belays are equipped with two ring bolts except for the final one, at the end of grade III climbing, which has been fitted with a single bolt. Should it prove necessary you can abseil down the route, and to do this you’ll need a 70m rope.

Sartorelli was born in 1965 but is “evergreen” 🙂 He’s certainly less famous than a whole bunch of other alpinists but I can assure you he know’s his stuff! So thanks to Bruno and Danilo for this great new route.

The obligatory grade is 7a, but we look forward to thoughts and confirmation from future ascentsionists.

Passo Giau (2233 m) is reached easily from Cortina d’Ampezzo, ideal for those coming from the south and the A27 motorway. Otherwise, reach the pass from the other side via Caprile and the Agordino valley.

Park circa 200 before reaching Passo Giau (coming from Cortina) in the obvious lay-by on the left. Follow path # 436 that leads to Forcella Giau (45 minutes).
From the col continue to the base of the face and traverse below it. Continue past the start of Re Artù and I love my dogs and follow the tracks to beneath the second bastion.
The start of the route (bolt visible) is located at the base of a long black streak (15 minutes from Forcella Giau).

1 – walk along the path NW to reach the obvious notch on the right (5 minutes). The first of three anchors is located at the start of the gully; continue down via three abseils and a short scramble to return to the base of the route. This is the descent used by those who have climbed the routes put up by Mario Dibona on Monte Formin. One 55m rope suffices for the abseil. In case of rain or other parties watch out for loose rock.
2 – alternatively descend on foot; reach the Forcella Rossa del Formin path then continue down (first # 435 then # 436) to return to Forcella Giau and Passo Giau (2 hours circa).
3 – last option, abseil down the route. A 70m rope is needed. This is best avoided though if there are other climbers on the route.

NOTES
Croda da Lago and Fastoni di Formin are particularly prone to thunderstorms and lightening strikes. In unstable weather conditions I recommend you choose not to climb this route.