Fauna: the animals of the Dolomites.

I’ll outline here the most common and best-known animal species but it should not be forgotten that Dolomite fauna is very varied and that there are many animals of great scientific interest which are less well known in the Dolomites.

The great variety of habitats in the Dolomites means that many animal species have found ideal places within it in which to settle and live.

In the ungulates category, chamois is the most common animal but there are also ibex, roe deer, deer and mouflon, typical of Sardinia and Corsica and introduced to certain areas of the Dolomites from 1974 onwards.

In wet locations, you may well come across amphibians such as fire salamander with their characteristic black and yellow colours and alpine newts. In sunnier places, on the other hand, you will often encounter reptiles such as vipers and common European adders. 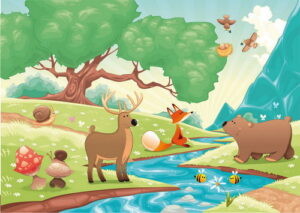 Forest fauna is extremely varied and you will find many squirrels while the most common birds are woodpeckers and owls which both live in tree hollows (black woodpeckers, boreal owls, spotted woodpeckers and Eurasian pygmy owls).

The many bird species here include golden eagles, capercaillie, black grouse, Eurasian eagle owls, goshawks, martens and rock ptarmigans. Bearded vultures merit a special mention as they have been repeatedly seen circling over and landing on the rocks of Mt. Tofana and it is hoped that they will one day nest there.

You often find large colonies of delightful marmots on high altitude pastures as well as rock ptarmigans which change plumage seasonally together with hares and stoats which change coat colour seasonally.

Another three large mammals have recently made a reappearance in the Dolomites: bears, lynxes and golden jackals. They have been spotted recently in a number of locations but they have not as yet formed settled colonies in the area.

Do you know who Angelo Dibona was?